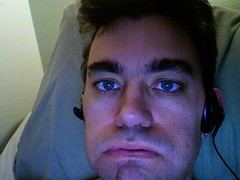 The most extreme pain I've experienced so far in my life was from an odd source. In the late '80s I had an ingrown big toenail on my right foot—several attempts to get it to stop growing into the flesh of my toe were in vain, so eventually a surgeon removed the nail entirely and killed the nail bed with sodium hydroxide, so I have had no right big toenail at all for almost 20 years. (Worry not: my feet were plenty ugly before that anyway.)

But while I still did have that nail, whenever I stubbed it, the pain would be literally blinding: my vision would shrink to a tiny tunnel and it would take all my effort not to fall over. I'm glad that doesn't happen anymore.

The pain I have now is different. Saturdays are busy round here, and today ended with a big 21-person Easter dinner at my parents' house (which is next door to ours). I ate too much rich food, and discovered that right now, with the bevacizumab and other medicines coursing through my bloodstream, that is a really bad idea.

I spent the last half hour of my time there lying down in the spare bedroom, then came home and had a hot bath. But that didn't have its usual analgesic effects, so I paced around in my underwear with a hot bag on my torso, then tried lying down. That didn't help much either, and I was starting to think I wouldn't sleep at all tonight.

Now it's after mdinight, and things have improved a little with time and the natural actions of my digestive system. The hot bag is doing its job better, and I at least feel like typing something on this blog and listen to The Police's "Ghost in the Machine"—a nice change from simply wanting to crease up my face and make the world go away.

In a way I feel kind of wimpy. My serious treatment, with the real chemo drugs and radiation, hasn't even begun yet. My wife has been through much bigger pain—childbirth, obviously, but even her large tattoo probably hurt more than this. Yet it's becoming a grind, and I know that, in some form, I'm in for months of it.

This next week we start injecting poison into my body to try to kill cancer cells, as well as aiming high-energy radiation at them too. What will I feel like then?