So far, not too bad

Here are the only photos I took of the chemotherapy and radiation treatment I began at the B.C. Cancer Agency today, two weeks since I first took some intravenous antibodies at the same place: 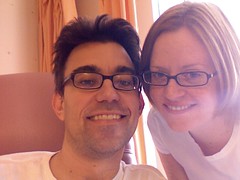 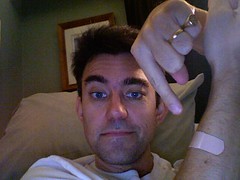 On the left, I'm sitting with my lovely wife, who stayed with me for the whole ordeal, which wasn't such an ordeal (in part because she was there). You can't see the IV tube hooked into my arm there, but in the next photo, on the right, you can see the only physical evidence of my procedure, a little band-aid on my arm where the IV went in. That still hurts, but not much.

But here's what those photos don't show, in chronological order:

Excuse me, but that's a lot of shit in my body right now. I know it's only the first day, but still, that's a lot of shit, and what's shocking is that I feel better than I did this morning—no bowel symptoms at all, no nausea, no real pain to speak of. I have a runny nose. That's my immune system reacting to a few of those drugs, I think, especially the antibodies and the immunosuppressive effects of some of the anti-nauseants. I'm tired (no kidding), but also kind of wired because some of the drugs are also stimulants and give me a weird buzz. The steroid has spiked my blood glucose, but I can control that with insulin.

The worst part of today? I dropped my laptop off a table in the bedroom here. But even it seems fine—no dents, and no weird behaviour either. It's posting this blog entry okay.

I waited a few hours to write this—12 hours since I started treatments this morning, and about five since I got home—to see if I had anything further to report. But no, all I feel is sniffly and, uh, weird. My body is definitely reacting, but rather mildly so far. I'm sure it'll get worse, but it's not a bad start. One more dose of capecitabine in about 20 minutes. Then bed.

I have more radiation tomorrow afternoon, and every weekday for the next month and a half, plus the pills every day including weekends. It's a nasty comparison, but remember those famous and awful photos of carpet bombing during the Vietnam War? That's kind of what we're doing to the cancer. Hopefully with more precision, and fewer civilian casualties.

I'll let you know how things are in the morning.