How a portacath works

A few people have asked me how the portacath (or more simply, "port") that I had surgically implanted last Thursday actually works. I wondered that myself until the nurse explained it before wheeling me into the operating room.

You can see from the photo at Wikipedia that the device comprises a small, round, dome-shaped reservoir—about the diameter of a Canadian dollar coin—and a tube about 30 cm long attached to it: 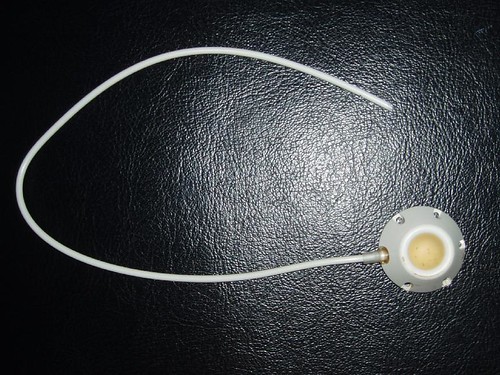 Dr. Chen, my vascular surgeon, put the reservoir just under my skin on the upper right portion of my chest, under my clavicle, then threaded the tube up into my jugular vein and down again so that the outlet is near my heart.

All of that is subcutaneous, so that the reservoir is a big bump under my skin and the tube is just visible in my neck, as you can see in my portacath self-portrait. (Beware, you have to look at my shirtless, half-shaved, still scarred and bruised chest.) Right now it's all still a bit itchy as the scars heal and the stitches dissolve, but it should be pretty comfortable in a few days.

Now, what will happen next Monday when I start chemotherapy again is that a nurse at the B.C. Cancer Agency will put a needle through my skin into the centre of the reservoir's plastic dome, and the chemo drugs will feed through there. After sitting for a few hours getting my first infusion at the Agency, I will be sent home with a small bottle also attached to the same needle, which I will keep on for two solid days until a health nurse comes to remove the bottle and needle and flush out the portacath with saline solution and heparin to keep it from getting clogged.

For the following 12 days or so, I just have the bump under my skin again. Then I go back to the Cancer Agency and start the process over. Lather, rinse, repeat for three to six months. Rather than having to start a fresh intravenous drip every time, the nurses can simply plug into the portacath, which saves pain, awkwardness, and effort, and lets me take the 48-hour infusion home with me instead of having to stay at the clinic, which is a bonus.

Assuming the chemo treatment works, once it is done some months down the line, a doctor can remove the portacath again and I will heal up with just some minor scars.

I once had the unfortunate job of needling people for weekly IVs. All these patients were cancer patients, and most didn't have a catheter like yours. As weird as it looks to have that on your skin, it's one of the best things you can do if you have regular IVs, less traumatic for everyone, poker and pokee.

i was actually wondering what the deal was with that too...so thanks for the explanation! that is some crazy stuff, but kinda cool way of cutting down on the poking.

i just had apotacath put in a week ago--if i move in a different way sometimes it hurts--do you experience any pain from portacath?

My husband had a portacath placed in March and has received two rounds of chemo. Last week he received IV fluids and anti-nausea meds. On Friday his right neck became very swollen starting over the right clavicle and progressing until he looked like one of those lizards with a neck frill. He is on his sixth week of radiation to his neck so how can I figure out if the swelling is from the radiation or a leaky portacath ( or a badly accessed portacath.)
Having a nervous breakdown in Memphis.

I don't know! (I'm not any sort of medical professional.)

Your doctors and other medical staff are the ones who'll have to figure it out. I will say that when I had radiation in my rectum, I did get quite a bit of swelling there -- though it wasn't visible externally.

But this sounds pretty alarming. I'd get to the doctor or cancer clinic ASAP if I were in his position.

I had a port "installed" ijn October 2002 and it has served me well over the years. My question is should I get a new one...I guess they are now called power ports and allow CT and other scan techs to use them, but not my old one. It's a bit bruised now and somtimes takes a lot of pressure to stop bleeding after the Chemo needle is removed. What do you think?