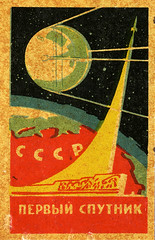 Back in the late 1970s, a traveling exhibition of Soviet space program artifacts and replicas came to the H.R. MacMillan Planetarium here in Vancouver. My parents had bought a lifetime membership to the Planetarium when it opened in the late '60s, so we went there all the time, and this was a particularly exciting event.

The part that made the biggest impression on me was the very loud demonstration scale model of the massive Soyuz rocket that launched (and still launches) Russian space capsules. I remember its distinctly Russian shape, with the flared boosters at the bottom, so different from the straight-arrow American designs such as the Saturn moon rockets.

When I saw the exhibition, Sputnik was not even a quarter century in the past, but to me as a kid it was ancient history. In that time, people had orbited the Earth, gone to the Moon, sent robots throughout the solar system, and were about to launch the first reusable Space Shuttle.

Today is the 50th anniversary of that first-ever Sputnik orbital flight. As far as people going into space, not much genuinely new has happened since I saw those Soviet rockets. We have the space station now (built through cooperation between post-Soviet Russia, NASA, and other space programs around the world), but we're also still flying Soyuz and Shuttle missions, and no one has been back to the Moon since 1972.

Sputnik was the first, and it turns out to have been the model too. Its successors, robotic space probes, have accomplished remarkable things since, from examining the Sun to plunging into the atmosphere of Jupiter, landing on Saturn's moon Titan, and going way beyond. Every day, people across the globe use communications satellites and GPS and satellite views on Google Maps without a second thought. Sputnik, by striking fear of Communist supremacy into our hearts, also energized the Western world's science education programs. Indirectly, I'm probably alive today because of the scientific and medical research prompted by those changes, which improved treatments for both diabetes and cancer.

UPDATE: IEEE Spectrum has a nice feature on the anniversary, including an interview with Arthur C. Clarke in which he points out that "space travel is a technological mutation that should not really have arrived until the 21st century. But thanks to the ambition and genius of [Wernher] von Braun and Sergei Korolev, and their influence upon individuals as disparate as Kennedy and Khrushchev, the Moon—like the South Pole—was reached half a century ahead of time."

Thanks for the post. It brought back lots of memories. Then I remembered that I had saved some stamps from back during the first Apollo/Soyuz missions so I took a snapshot for you.

it looks like the link in the previous post got truncated. The name of the file is: