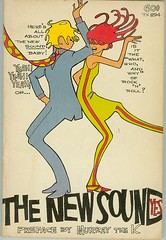 When I was learning to play in a band, back in the mid- to late '80s, there was a 1960s revival going on. We even had an AM radio station in Vancouver that played almost nothing but sixties music, from the British Invasion to the weird one-hit wonders like the Trashmen's "Surfin' Bird." So it's no surprise that I ended up even today playing in a faux-sixties cover act.

But despite Austin Powers, that revival did fade in favour of seventies and eighties revivals. And while there is no grunge revival yet that I can see, there does seem to be another small sixties revival underway. It's most obvious in TV commercials.

The new "Joe" clothing line has a full-on go-go dancing crowd shimmying to the Kinks' "Everybody's Going to Be Happy" (not a particularly well-known number of theirs). Similarly, Canadian retailer The Bay has a new "Boom" line of women's clothes and accessories, and the TV ad includes a Yardbirds-esque version of John Lee Hooker's "Boom Boom." Even Mini Wheats cereal has gotten into the act, with moppy-haired psychedelic retro animations behind its catchy singing wheat square belting out groovy Scooby-era pop.

I don't know if it will become more widespread, but commercials often plant the seed for new musical discoveries by kids who buy music. My nine-year-old daughter (who admittedly already calls the Beatles her favourite band, and wants to meet Paul McCartney someday) discovered the Kinks through that Joe commercial. And of course there's the success of Amy Winehouse singing tunes that sound like Dusty Springfield.

If Apple adds an old track from "Nuggets" to an iPod commercial, you'll know the sixties are going mainstream again, baby!

Yep. And Amy Winehouse is as self-destructive as Janis Joplin, too.

Surfin Bird is one of my all time favorite songs. The kids and I listen and dance to it regularly.

I'm hoping for the Brazilian Stuff coming back like Sergio Mendes doing Mas Que Nada. It's way off of Surfin Bird, but one of my favortite songs. Kinda jazzy 60's stuff.