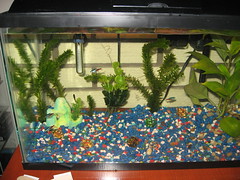 Last year we had a sad attempt at raising a single fish in an aquarium. He didn't last long.

This week, my wife and kids took it much more seriously and prepped a nice tank that now has five tetras in it. They seem quite happy, with live plants and colourful gravel, as well as a quiet high-tech filter that is keeping the water beautifully clear.

I'm quite enjoying the burbling sound and spending time watching the little tropical lake fish swimming around. The girls check on them regularly and feed them morning and night. I think we'll get some more fish soon. It's certainly a lot easier than a dog.

I remember when I was a kid we got four goldfish and named them all after my dad ... joseph, real, francois, and morel. i think they lasted about a week.

We have a cat from a couple of doors down who visits us for long periods of the day. It's like owning a pet without any of the irksome feeding.

When I was a little girl, I won a fish in some kind of luna park or shooting stand, I don't remember. Anyway, we had the fish, and it was called Ali Baba.

This animal was suicidal. It kept jumping out of the tank, and once it fell behind the washing machine. I just have memories of my dad removing the machine to rescue the fish, while I was crying and yelling and urging him to hurry because I feared it would die if he wasn't quick enough.

And then, some day, the fish disappeared mysteriously. I never knew if it just died, or if it finally ended behind the washing machine, or what happened.

It was 35 years ago at least, so maybe it is only time I should ask my dad about it.

Don't overcrowd the tank, make weekly partial water changes and keep the chemicals balanced = the key to a happy aquarium :)

When feeding these fish, please remember their stomachs are about as big as their eyes. Don't give them too much!