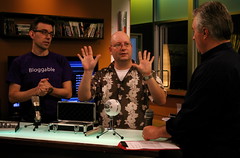 Back in June, my podcast co-host Paul Garay and I recorded a couple of segments for Leo Laporte's cable tech television show The Lab With Leo. The episodes went on air a few weeks later.

Today Paul and I are recording two more bits, about Apple's Logic Studio 8 and hybrid multi-function audio devices. The episodes we make today will go on air at G4 Tech TV in Canada and the How To Channel in Australia later this year.

Appearing on The Lab is fun, and I can say that Leo—a long-time radio and TV host, as well as a podcasting pioneer—is pretty much exactly the same nice guy in person as he is on air and on podcasts.