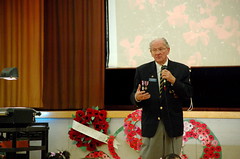 I went to St. George's School, a private boys' high school in Vancouver. It was founded in the early 1930s, so many of the school's first graduates fought in World War II. Quite a number of them died.

Each year on Remembrance Day, November 11 (even if it falls on a weekend, as it does tomorrow), the school holds a large service where the names of those dead former students are read out. It takes some time.

My daughters' public elementary school, Chaffey-Burke in Burnaby, also used to be my school, from kindergarten through grade seven. It held its Remembrance Day assembly yesterday, and I attended. The school was built in the late '60s, so none of its former students are veterans of the big wars, but the assembly was still a significant event. The staff work hard to make the remembrance something real, not a simple reciting of platitudes.

As part of the event, the school invited Mr. Tom Stewart, a local World War II veteran, to attend and speak. He brought a photo of himself as a boy in uniform, before he set out to fight, and reminded the students that kids like the one he was, teenagers not that much older than the pupils themselves, not only went off to Europe and the Pacific then, but are doing just as hard and dangerous a job in Afghanistan now. The military, he said, doesn't decide to fight—those are political choices—but youngsters are always the ones hired to do the work, to risk injury and death.

As they filed from the gym, each student shook his hand—many in a rush to get some lunch, but some with genuine appreciation.

Canada treats Remembrance Day pretty seriously, even though we haven't had a drastic war on our own soil. The carnage of World War I in Europe, which inspired the day, changed the demographics and politics and character of this country irrevocably. And Canadian coffins flown back regularly this year from Central Asia remind us that despite what we should have learned from all the horrors of the 20th century, peace is a long way off for many people in the world—ourselves included.

I've always treated Remembrance Day pretty seriously too, in part because of that list of names of my distant high-school colleagues. More so this year, as I face my own thoughts of death. Even a hardened cynic would find it pretty hard to hear 400 poppy-wearing little kids singing "Where Have All the Flowers Gone?" and not get a bit choked up. Especially when they start singing it again spontaneously at the end of the ceremony, long after they were supposed to be finished.