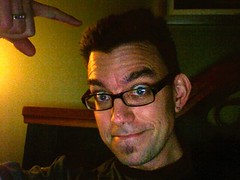 Let me explain that. This morning, I talked to a social worker in the patient counselling department at the B.C. Cancer Agency, as I do about once a month, just to get things off my chest. I was having a CT scan later in the day, which would be the first test in several months to see whether my current chemotherapy round is actually killing my cancer. I felt mixed about that, not knowing what path my life would take in the next few months, even more so as I prepared to give a speech at my friend Martin's memorial service on Sunday.

The scan itself was uneventful, and I didn't expect to hear any results until Tuesday, when I next see my oncologist Dr. Kennecke. So my wife and I drove back to Burnaby. The chemotherapy has started to thin my hair, which isn't falling out in clumps, but is shedding some in the shower, so I decided to get a short haircut again in case that gets any more pronounced. After that, my wife went to find some shoes and I had a snack at the food court.

While I sat at the table, my phone rang. I expected my wife, but it was Dr. Gill, another oncologist from the Cancer Agency.

"The CT scan found an incidental blood clot in your lung," she said.

"Are you having any trouble breathing, or chest pain?"

"That's good. We'd still like you to come back to the Agency this afternoon, so we can start you on some blood thinners. How soon can you be here?"

"I'll see you as soon as you arrive."

I called my wife. She freaked out a little. I called my dad, who was watching the kids. He sounded calm, but I knew he'd also be freaking out a little. Back into the car, through traffic, at the Cancer Agency by 4:30.

A nurse immediately took us aside. "Take this form up to the lab for some blood tests right now. You can also take this prescription to the pharmacy down the street and get it filled immediately. Then come back here to Station C and Dr. Gill will see you." In a flash we were back at the elevator, blinking and stunned, my wife to go the pharmacy and me for my blood tests. We were both back within 20 minutes, when Dr. Gill met us and explained what was going on.

Some of the chemotherapy agents I'm taking, particularly Avastin, can lead to bleeding and blood clotting. I've noticed that in places like my nose. Turns out it's happening in my right lung too.

So now we have a new drug in our cupboard, a series of syringes of anticoagulant (blood thinner), which I must inject subcutaneously, the same as I have done with insulin for the past 17 years. I'll do that once each day for the next six months or so. The drug will help prevent the clot I have from growing, and should help keep new ones from forming. I will also bleed and bruise more easily as a consequence.

The good news is that Dr. Gill also told us about the main result of the CT scan, which is that the metastatic tumours in my lungs have not grown. Indeed, some are stable, while others are "noticeably smaller." So the chemo is doing something, which is the whole damn point. While obscured by our alarm about the blood clot, that is the kind of news I've been waiting to get for a whole year.

The nurse who came to show me how to administer the blood thinner (it's so similar to insulin injections that I was very comfortable with the procedure right away) also listed off some of the possible side effects, but said, "These probably won't be a worry for you, because you're young and healthy."

I laughed. People like me with stage 4 metastatic colorectal cancer don't apply the word "healthy" to ourselves too often. But that was also good to hear.

Oh, Derek, there is only one thing I understand in all this : the cancer finally is going backwards, instead of forwards.

All the other shit - well, yeah, of course, I don't really get it, seems like you own a real chemist's shop at home.

You know most people don't take their prescriptions properly ? I read recently that only 1/3 of the people with important diseases take their medicines correctly. So if you do, you incredibly increase your chances of getting better. Sounds stupid, doesn't it ? Medicines only work if you use them, not if you keep them in your cupboard.

Anyway, those metastases are going backwards.

Nothing else is really important, is it ?

I don't know what superstitious things people do in Canada, here, people touch wood, for some reason. So I guess we'll be touching wood for you.

Rollercoaster, indeed. It's been a year of lurching up, down and over this ride, my friend.

This sounds like great news to me. The first in many positive reports, I hope.

Rollercoaster, roll with the punches, counterpunch, thanks a bunch for some good news about your cancer.

You're quite obviously doing what you need to do for yourself, Derek, and as someone else who's struggled with this disease (albeit in a much more minor way than you), I'm proud of ya.

hi derek: that's great news! i will continue to send positive vibes your way. happy 2008 to you and your family.

YAHOOO!!!!! That is very awesome news. Good that you caught the blood clot.
See you Sunday. We'll do a celebratory jig.

Wow! That sounds so horrible, but you also sound amazingly strong. You are an inspiraton!

Hey Derek, most importantly, great news about the chemo working. I'm sorry to hear about the clot in your lungs, but it sounds as if it was caught early and that you have a positive plan to get those under control quickly.

Holly & I will be thinking good vibes for you.

Happy New Year Derek, sorry to hear about the blood clots, but great to hear that the chemo is doing what it should.

Good luck for the coming year!

Despite the situation (clot), this is good news! Everyone in the team here at Navarik breathed a little sigh of relief this morning. Keep fighting.

Hi Derek, great to hear good news! You are a very brave man and I'm sure you will win.
I wish you and your family a very good start in this New Year, full of positive energy, and good health.

Hey, been reading your blog for a while. Nothing much else to say, other than I'm happy to hear the good news and hopefully the medications will continue to work from here! peace!

As an outsider, the rollercoaster effect of this post leaves me wondering if this is good news or bad news.

I believe the overall effect is good because, despite the clotting, it is not unexpected and it was caught early enough to prevent a disaster -- even if there is a new element to life management.

Congratulations that the chemo appears to be working and here's hoping you can join us at PAB.

Hi Derek .....this is the very best news yet for 2008. I'm so elated for you and your family. We will keep following your progess which is going in a positive direction. Congrats Derek and well done. Medicine is responsible for some of your good news, but a good attitude like you have is also necessary to beat this horrid disease. Keep it up ...Barbra

Sounds like a positive start to 2008. Let's hope the good news just keeps on coming.

I'm so sorry to hear about the blood clot . It sounds like you had a very alarming day. Good news about the cancer getting smaller though. I hope the good news continues but I'm afraid the grey hairs will only increase.