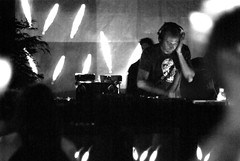 I've been wondering how to write this blog post all day, or whether to do it at all. But it seems silly (not to mention out of character) to avoid, so I'll just see what comes out.

UPDATE: This post originally had "1970-2007" in the title, which was wrong. I knew that in my head (Martin was born before me, in 1968), yet his Facebook profile said differently, and I used that. Details are easy to screw up. I've corrected the title after a note from our friend Johan.

I've also now set up a memorial page for Martin, including links to articles about him, copies of the notes from his eulogy speakers, and photos from his memorial event on January 6, 2008.

I heard this morning via a phone call from my good friend Simon that one of our mutual friends, Martin, died early in the day on Christmas Eve. While I didn't see much of him these days, I had known Martin for more than 20 years, since our days as BBS geeks in the early 1980s. We first met in person at Vancouver's Expo 86, at least a couple of years after I'd met him virtually online. He showed up at Expo with a shock of blonde dyed into his dark hair, and a Super 8 film camera with which he was making strange little time-lapse movies of everything he saw.

I can't confirm what details I've heard about his death, so I'll avoid repeating them in case anything is incorrect. His last Facebook update, from a week ago, talked about the snow on one of our local ski hills, from which he'd just returned. So his death seems to have been quite accidental, and certainly unexpected. While over the years it has happened to a few people I've known who were roughly my age, Martin is the first friend of mine to die, as far as I can remember.

He was a talented engineer who had recently "retired" (in his mid-30s) after making a bunch of money when his video game company was bought out. He seems to have spent much of his time since then DJing and organizing raves and other events. Maybe he'd spent some time riding freight trains, at which he was also an expert. Both of his parents and his daughter, now a young adult herself, have survived him.

Years ago Martin and I used to take mountain-biking trips together in the backcountry around Greater Vancouver. Engineer that he was, he brought the topographic maps (this was pre-GPS), and he was always hard to keep up with. We traversed the logging roads between Squamish and Indian Arm. He witnessed my worst-ever case of road rash, where I took a downhill on a logging road too fast and ended up sliding down the gravel on my side.

I've thought a lot about death this year. Having stage 4 metastatic cancer will do that. What's particularly strange about it is that Martin hosted a party for me on in June at his fabulous condo high up in a Yaletown tower, a few weeks before the big surgery that put me in hospital for most of July, and from which it took me months more to recover.

Yet here I am, still kicking, feeling as good as I have in all of 2007 despite my ongoing chemotherapy, and Martin is suddenly gone.

I haven't cried yet, but I still may. I came close when I saw my youngest daughter sprawled out asleep in bed as if she'd fallen from the ceiling, and it reminded me of Martin's daughter doing the same at a party about two decades ago. Mostly I distracted myself in a lazy post-Christmas day with my family watching TV (including a whole slew more of MythBusters), and late tonight I've been listening to a bunch of blues, plus the amped-up blues that is the latest White Stripes album. Jack White's Ph.D.-level guitar distortion helps draw the sadness out and cauterize it a bit.

Part of me feels it slightly unseemly to write this, since I'm not sure it's what his family and closer friends would want. Yet I hope they don't mind, because not writing it wouldn't be right either, like a hole in this blog—always a very personal place for me—where something important should be.

I'm not one to speak or write to the dead, as many are doing on Martin's Facebook page. I don't think he's anywhere to hear me anymore. I'll simply say that, as little as I saw Martin in recent years, I miss him with his twinkly eyes and off-kilter funny techie stories. I know many other people who surely do too. Together our memories will preserve what was best about him.

Derek, thanks for writing this.

I hadn't seen Martin in more than a decade, but my teenaged memories of him are very similar to yours. He was one of the first Excursionists I met, just after the famed Expo 86 meet. I looked up to him as a friend, a programmer and a role model. He always managed to strike just the right tone of gentle sarcasm, keeping perspective without being unnecessarily cruel. And I still remember how proud I was when he took a couple of ideas I'd coded into my own hapless BBS and incorporated them, vastly improved, into Blue Hell.

I remember his birthday party in 1988, held a month early (or was it a month late?) to guarantee the surprise; I remember meeting his daughter for what would turn out to be the only time, the first infant I ever held.

When I dropped out of grad school in 1994, it was Martin who phoned me up and said, "You used to be a pretty good programmer. If you sent me a resume, I bet I could get you a job." But I was too depressed that winter to believe I had any skills at all: I wrote a terrible resume, and never sent him the music demo tape I'd promised.

I had the chance to see him just last weekend, and passed it up, welcoming the chance to reconnect but thinking (don't we always think) that there would be another opportunity soon. I'll be kicking myself about that for a long time to come.

-Karen, once upon a time aka The New Zorker

ahhhh derek, i'm sorry for your loss and my heart and thoughts go out to his family.

I thought so. Guess I shouldn't have trusted his Facebook profile. Changed.

Your comment is perfect, Karen. There is that magical time where all of us came together in the early Eighties and I think if I were to point to one primary catalyst, it would be Martin. I envied his talent, loved his wit, and admired his complete disregard for normality.

My son Matthew just said it best: "I'm sorry your friend died, Daddy.". So am I, and a lot of other people, Matthew.

Again Derek, you've expressed your sentiments in a way that resonate uncannily with my own.

Martin and his Blue Hell/Blue Board creations were critical components of my finding my own voice. I've ridden trains to random interior towns with him, explored subterranean storm drain systems, and countless other hyper-nerdy adventures that we shamelessly did while clearly being too old for such things. I see him as having been a geek's geek long before the rest of society realized how infinately cool that was. Frankly, I'm still in shock and possibly denial that he isn't a phone call away right now.

Utter shock doesn't adequately express how I feel at this moment.

I am just sitting here shaking my head hoping this isn't real and, like Andrew said, wondering if someone will call saying it was all a mistake.

I first got to know Martin many years ago when we lived just a few blocks apart and I frequented Blue Hell, his innovative BBS for the Commodore 64.

The days at Expo were exciting and hilarious, teenagers running amok throughout the exhibits and shows. I remember specifically running up and down the concrete highway that crossed through the Expo park.

I have seen very little of him in the last 10 years or so, the last time at his apartment downtown where a number of us had gathered. It was great to see all the faces again, everyone strangely the same but different at the same time.

I remember the day I met him, soon after I logged into Blue Hell for the first time and I realized that new things weren't created by companies and faceless entities. They were created by people. Curious and creative ones.

Martin was a curious and creative fellow.

I am so sorry to hear about Martin's death, Derek. I am sending good vibes your way.

A friend of mine, Rick, drowned while fly fishing one sunday morning, seven and a half years ago. I had a very difficult time with it. I had known Rick for only a few years and I knew that the world was a better place with him lighting it up everyday. I remember my first and last encounters with Rick and I can still hear his voice in my head.

Here's to Martin and Rick. They made this world a better place and they're probably tearing up the afterlife together.

I have fond memories of Blue Hell, where I was known as Charlotte.
I met Martin and the BBS gang at an Expo meet and for the next two years enjoyed Tuesday night movies, Denny's grilled cheese sandwiches with fries and mayo (still can't eat fries with out mayo to this day), camping at long beach, and Sunday night dinners with Majong and Star Trek (TNG). Those are still some of my best memories.

I had the pleasure of staying with Martin's parents for a few weeks back in '98 when I was on a trip to Canada as a 19 year old. Martin showed me around a bit and took me to his flash pad up in the hills. He told me all about his trips on the freight trains and how he'd take me for a short trip some time (although not to mention it to his mum!)

A few years later he came over to London for a weekend on a record buying trip. So, I didn't spend much time with him overall, but he made a real impression on me and I often looked forward to catching up with him again. I just wish I had done that now...

I know one thing though, although his life was short, he achieved so much more than most.

I'm more saddened by hearing about Martin's death than I can say.
One of the deep regrets of my life is that I never thought to take photographs of the Sunday dinners with Mah Jong, Start Trek TNG, games of risk, and all that.
I have very fond memories, but no pictures.
I remember being shown Brooklyn as a brand new baby.
I remember laughing until it hurt at some story of Martin's.
I remember the glow-in-the-dark stars on his car, the stories of the adventures and excusions, and logging on to Blue Hell.
I haven't heard from him in 20 years, but he still leaves a Martin sized hole in the world - and given how big a personality he had, that's a very big hole.
Laurie