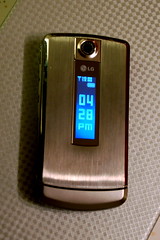 She could have waited until Christmas, but instead my wife made an early gift of it and had me pick myself a new mobile phone today. It's an LG VX8700, also known as the "Shine." Unlike my previous handset (the ancient LG 3200), it has a camera, memory expansion, outer lid screen, and Bluetooth, and it's metal.

I know Roland "CDMA s*cks" Tanglao wouldn't agree with my choice of a non-smart CDMA phone instead of a cool Nokia-Symbian GSM device. But, quite differently than in other areas of my life, I'm not a phone geek. I have no interest in getting an iPhone, for instance. I probably wouldn't even have noticed that my old phone contract had expired if my wife hadn't pointed it out to me. I just want a phone that works, is reasonably rugged, makes and receives calls, gets decent reception, and can take a photo from time to time: 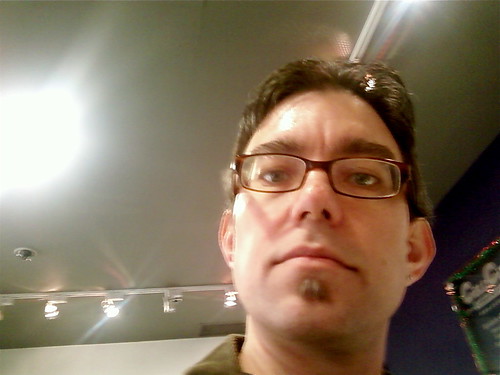 I've also stayed with Telus as my carrier for this phone, because unlike other parts of the company, their Mobility division actually seems to care about keeping loyal customers (I've been with them since 1998), and gave me a better deal on both the phone and my plan than new customers can get, plus threw in a free car charger.

Telus does cripple some of the Bluetooth functionality and other features of the phone, but I'll live with that for now. I don't want to use it as a modem, or for email or web browsing, especially at the usurious rates Canadian carriers charge for mobile data access. I've figured out how to get files to and from my MacBook via Bluetooth. I think the ringtone-purchase market is insane, but luckily there are several built-in ring options that sound like an actual telephone, so I'll use one of those.

The biggest annoyance? No way to transfer all my phone contacts over without re-entering them. Sigh. But the Shine still fits in the pocket of my carry bag (okay, okay, "man purse," as my wife calls it), which is a key consideration. Off we go.

i say live and let live :-)
whatever works for you
if u care about great pictures and video then there are no good CDMA phones from telus or bell, but in 2008 most people don't care except krazy people like me !

I'm not much for video, but if I want great pictures that's why I have my Nikon!

Shame is doesn't work with iSync. You just pair via bluetooth, open isync, add the device, sync it, and all the calendars and contacts just get added.

the nikon is a great camera but you have to go through the "chain of pain" to get the photo off your camera and online, since i also have a canon dSLR I know this chain of pain well

in the future all cameras will do this automatically (upload online automatically, probably to a private area for normal people and a public area for krazies like myself)

shozu and eye-fi are the harbingers of this

Yeah, the 8700 is unsupported via iSync, alas (I tried). In any case I would have to enter contacts either via Address Book or in the phone, since there's no way to get contact info off the old phone regardless.

And I don't find the download/upload process from my cameras (or the phone now) all that painful a chain, especially since I like to do some weeding, cropping, and processing before I upload anyway. There might be occasions when I miss being able to upload directly from the phone, though I suppose I could do Flickr email if I were desperate and willing to pay the email fee.

We'll see how I sort it out.

Well you could copy all your contacts to your SIM card on the old phone, then put SIM card in new phone and transfer them all over.

That has worked for me before....