Getting a good baby passport photo, plus some pictures of bigger things

Passport rules have changed in the past couple of years in Canada, and now children, even infants, must have their own passports rather than riding along on those of their parents. That includes passport photos. For our kids that was no problem, since when we got them passports in 2006 they were already 6 and 8 years old. But I've been to a few photo stores and watched as parents and staff have some difficulty keeping their floppy-headed two-month-olds upright, looking at the camera, and reasonably calm in order to get an acceptable shot.

Yesterday I had some time to kill in the Vancouver neighbourhood of Kitsilano before my wife took me to my latest chemotherapy appointment, so I popped into the main store of Lens and Shutter to do some photographic geeking out. Their infant photography technique is smart: put a big white piece of cardboard on the floor, lie the child down on it, and have the parents stand behind the photographer to keep the kid engaged during the photo process. The little one I saw there was reasonably happy, kept his eyes open, and managed a reasonable passport photo in only a few tries.

My wife suggested I mention this as a useful tip. So if you have baby who needs a passport, go to Lens and Shutter or ask your local passport photographer to try a similar method.

Phil Plait at the Bad Astronomy Blog has posted the 2007 edition of his annual Best Astronomy Photos list. This year features more galaxies and fewer planets than the 2006 version. Look at this example: 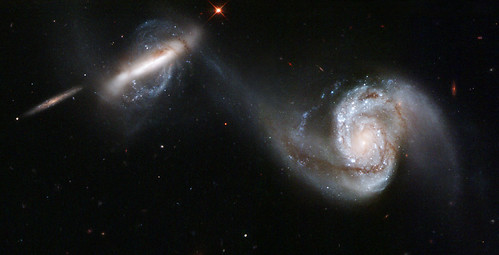 NGC 3808A and NGC 3808B are several hundred million light years away, yet still we can see what they were up to back then. Wow.

Long time lurker...first time commenter. Just sent in an application for my son last week, and _laughed_ at this:

"A full front view of your child's head and shoulders is required. Please note that the parent's hands or arms may not be seen in the picture. Passport Canada is, however, lenient about the expression of a newborn (mouth open or smile)"

I think the kid I saw even managed the requisite mouth closed, neutral expression. But he was in a pretty good mood overall, which is maybe why his parents picked that time to try for it.

wow - took my breath away. tx.

I went to Lens and Shutters for our 2 month old's photos. They have a good concept going with having a sheet on the floor. Becareful to check the photos for shadows. When we went to the Passport Office they rejected the photos because there was a shadow under his ear and under his arm. Luckily there was a photoshop in the food court area that takes photos of babies. They have the baby sit up and they hold the neck/head of the baby. Then they photoshop their hand out of the photo. It's double the price so you're better off getting it done properly elsewhere.