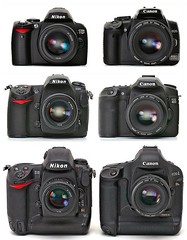 In photo-geek cirlces, Canon vs. Nikon is something like the endless Mac vs. PC debates. They are the two heavyweight gorillas of the industry, especially in the market for digital single-lens reflex (DSLR) cameras, with everyone else—Pentax, Olympus, Leica/Panasonic, Sony/Minolta, Fuji, and so on—picking up what customers they can in the giants' wake.

However, unlike in computerland, any decent photographer, no matter how rabid about his or her preferred brand, would likely acknowledge that both Nikon and Canon produce excellent cameras and lenses, and if given one or the other to shoot with, could do a good job with only minimal transition time. Canon has dominated in both professional and amateur circles for the past couple of decades—whereas Nikon used to be the overwhelming pro favourite in the pre-autofocus era before that.

It's interesting that Japanese companies have dominated the camera market for so long (though of course they manufacture all but their top-end cameras and lenses in places like China and Thailand). Through the first half of the twentieth century, the companies that dominated compact cameras were American (Kodak) and German (Zeiss/Contax and Leica). Kodak and Leica are still making cameras, while Japan's Kyocera bought Contax some years ago, and stopped making Contax cameras in 2005. Zeiss remains a top-end, German-based lensmaker, supplying Sony and others these days.

But while Kodak continues a respectable business in the point-and-shoot market it created more than 100 years ago ("You Press The Button and We Do The Rest" was its catchphrase then), and Leica has a strong niche market among elite buyers, and in larger formats there are companies such as Sweden's Hasselblad (now also owned by a Japanese group), Japan has been the heart of the camera industry since at least the 1960s.

I've been a Nikon guy for 25 years, ever since I graduated from my dad's old Pentax SLR to a Nikon FG I bought for myself around 1982. I could just as easily have chosen Canon or Olympus or Pentax or Minolta then, but as it was I've kept a stable of Nikon lenses about during that whole time, which meant I've kept buying Nikon bodies to go with them.

For someone new to photography, the only simple way to tell Nikon and Canon SLRs apart is by reading the name badges on their pentaprisms, and to note that Nikon likes to include a red swoosh at the top of its camera handgrips. But for people who take lots of pictures, there are differences that we've grown accustomed to.

Nikon, for example, has used the same basic lens-mount design (the F-mount) since the 1950s, so even the newest Nikon SLRs support most Nikon-mount lenses ever made, especially those from the last 30 years, as well as lots of third-party lenses, even some swanky ones from Carl Zeiss in Germany. Canon, on the other hand, has changed its lens mount a few times to support newer technologies—the last major change (to autofocus) abandoned previous Canon lens designs, but enabled faster autofocus than Nikon could achieve, which is why the pros all moved over.

That's a big difference, but the little ones are important too. How the power switch works. Which finger you use for the adjustment dials. Where the buttons are, and what the different modes are called. Some photographers (me included) prefer Nikon's approach to ergonomics, but Canon's cameras generally look sleeker, especially at the high end. Most agree that Canon's lens caps kinda suck.

But you know what? For people just getting into digital SLRs, I think the best deal right now is the Pentax K10D. It offers things that neither Canon nor Nikon does, such as weather-sealing at an introductory-level price and in-camera shake reduction that works with any Pentax-compatible lens, not just those with shake reduction built in. Unless you expect to turn pro one day, that might be a great choice.

Great article, Derek. In the late 70's and early 80's, Pentax and Olympus produced some fantastic pro-level film SLR's (eg. Pentax MX, Pentax LX, Olympus OM-1, etc) that could hold their own against Nikon and Canon. Pentax lenses (Takumar, Pentax SMC - manual and auto) and Olympus lenses (Zuikko) were had among the highest reputations around.

Regretably, both Pentax and Olympus let go of the ball when digital SLR's came about, though they have both now come out with some outstanding gear (I have a Pentax*istD which uses all my Pentax-M lenses - it's a great camera. K10D is on my wish-list, and Olympus have some great gear now also) but they are short of the Nikon and Canon pro gear.

The nice thing about Pentax and Olympus gear is that the shake-reduction is in the body, not the lenses, so for a hobbyist the entry cost is more achievable. I'm glad I don't have to pay a huge premium for an IS USM 70-200mm lens as would a Canon user ....

I'm sometimes jealous of the good pricing Pentax offers on their lenses. Olympus seems to price things similarly to Nikon and Canon for the most part.

I used an Olympus OM-2n for long time. It was (is) a great camera. If Olympus had a digital SLR when I switched from film to digital, I probably would have gone that way. But, they didn't, so now I have a Nikon. I looked at both Nikon and Canon, but like you, I liked the ergonomics of the Nikon better. I have no regrets; very happy with the Nikon.

The red stripe dates back all the way to the F3, designed by Giugiaro. Canon uses a red stripe on its premium lenses since longer than that. I just pulled my father's old F3, put in some battery and a roll of Velvia, and I am going to take the grand old lady for a spin tomorrow. Whee!

That said, the real reason Pentax and Olympus have such small market shares (and are thus forced to discount heavily) is that they missed the autofocus revolution of the 90s (well, Pentax had some too-late products, but Olympus didn't even try). This meant their market share had already evaporated in film SLRs even before DSLRs came around. In 2000, Canon, Nikon and Minolta had about 30% of the market, with crumbs left for Contax, Leica, Pentax or Olympus. Since then, Canon and Nikon have left Minolta/Sony in the dust.