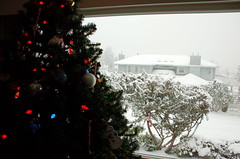 People from the rest of Canada often make fun of us here in the southwest corner of the country, where the weather is generally mild and we never face the kinds of minus-35°C blasts our brethren enjoy so much.

I do think, however, that this weekend's snowstorm, which has been coming down continuously since yesterday, counts as Actual Snow. We can't see the road or sidewalk or lawn, and the big fluffy flakes have built up a good 10 cm on some surfaces in our yard.

Typically, though, a sloppy wet tropical system is on its way to Vancouver from Hawaii or thereabouts, so it's all supposed to change to rain this afternoon and melt over the next couple of days. So we'll enjoy the prettiness today and slog through the muck tomorrow.

If you like, you can watch a time-lapse movie of our putting up the Christmas tree yesterday.

Just wondering if you'll be weighing in on the whole Facebook beacon controversy that's popped up this week... I'd be curious to hear your take!

Meh, the Beacon thing doesn't bother me all that much. A little, but it's not high on my priority list--it does reinforce that Facebook isn't happy happy joy joy all the time; it's a company wanting to make money in the end. I wonder whether moveon.org has gone a bit off the rails here too. It seems a strange priority for them. It'll get sorted out eventually.

You guys in the Metrotown area always did get the schwacks of snow when it happened. I always remember going home and having to find alternative routes when the police shut down Willingdon Road.

I don't enjoy minus 32 degree weather, I just make the best of it. I hope the rain has melted all that snow you have down there and I hope it has warmed up for you.

It's melted, but it was a heck of a slushy mess at our house for awhile. We tend to get more snow than much of the rest of Greater Vancouver, because we're on the north side of the hill near Metrotown, so it takes correspondingly longer to go away.

The transition was pretty amazing -- we went from minus-3 to plus-13 in a matter of hours. There were big clumps of snow glomping off our roof all night.

Nice pic in the topic!

I know this is not the right post to ask you, but I have red that you have professional writing skills and I'd like to improve mine, what course would I have to follow to do that? Would it be Creative Writing?

I wish I knew. Most of the people I know who write for a living have simply done it, a lot, for years. I took some Creative Writing and English courses, but most of my real learning about writing in English came in high school (particularly Mr. Fraser's class), and from working on student newspapers and such, and then by getting jobs where I did a lot of writing (editing handbooks, working at magazines, creating websites, and so on). In other words, lots of practice, as well as lots of reading.

I don't know if that's typical, or whether there are good courses to help you, because that's not really the route I took. I do know that learning to write not just well but also quickly helps a lot. For me, writing this blog continues to be good exercise for my writing muscles. But without an editor, you also need to enjoy editing yourself, which some people don't.

thanks for the answer.

What an Editor does?

It's been a while that I am working on my book, but at the moment I am still creating the ideas that I will later analyse in the book. Often when I work on it, I think of you.

Have you ever thought to write a book about your experiences with cancer?

Writing a book is a big long tortuous process and usually you don't up making any money, so no, not so far.

From what I've been reading, it's probably true that you don't make much money from writing books, but you do make money, albeit not much.

Yes I understand now what you mean about the Editor, I have a clear image of what he does. Before, intuitively I had incorporated his tasks with those of the writer.