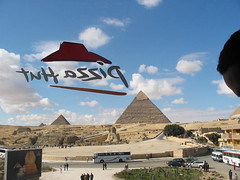 On occasion I have told a story from my wife's and my honeymoon, which we spent driving around California in a rented Chrysler Le Baron convertible. One night, after visiting Knott's Berry Farm, we found a Mexican restaurant for dinner and ordered burritos.

They came, but we couldn't see them, because each one had what looked like an entire block of cheese melted on top. Even today I associate the sound of a Mexican pop band (there was one playing downstairs) with the sight of that mass of bubbling cheese.

Tonight my kids and I visited one of our local Pizza Hut restaurants (much closer than the one in the photo). We ordered the special: the Triple Cheese Explosion pizza, where not only is there cheese on the toppings, but the edge of the crust itself is injected with the stuff.

It was overload. After an appetizer, my older daughter ate about half of one substantial piece (including the cheesy edge), while my younger daughter ate only some toppings from hers. "Too much cheese!" she said. Her sister said, "Look, it makes the plate greasy." I ate a couple of slices, and the rest came home with us.

Next time I think we'll go back to Me-n-Ed's.

me-n-ed's is good?
i moved to new west last spring with my husband. before that he lived in victoria and i lived in the states. we haven't had good pizza since we got to new west.

the me-n-ed's is right by the grocery store i shop at occasionally, and i've been curious for a long time. maybe we'll have to try it.

Yup, Me-n-Ed's is definitely good, especially if you like thin-crust pizza. They've been around at the same locations in Greater Vancouver for decades, despite lower prices and 2-for-1 offers from competitors, so that tells you something.

Derek
Sounds as if you and the family were 'supersized'.
Jodi
Yes,me-n-ed's is hard to beat.Try the curried chicken pizza.
Ralph

For authentic Italian pizza, try Marcello's on Commercial Drive. You will never go back to anything else.

I had Italian pizza in Italy, and I still prefer Me-n-Ed's. But I'll try Marcello's out!

If you're willing to make the drive, Uncle Fatih's potato pizza on Broadway and Commercial is ridiculously good.

Seriously, it's worth it.

I've had it. It is good, but it didn't seem especially miraculous to me.

i just want you to know that my husband pronounced this the best pizza, by far, that he's had in a long long time, maybe his whole life, but we HAVE been eating a lot of panago lately.

and they deliver to us!