Probability, the Fab Four, and my kids

As always, there are some people who think those darned kids today are taking us all to hell in a handbasket with their ignorance and filthy habits. However, I seem to recall titles like this only in my university statistics course textbook: 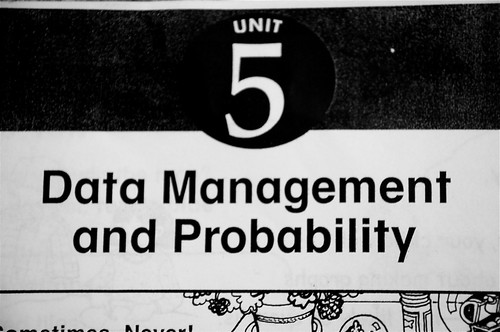 But that's not where it comes from. It's a school math worksheet for my younger daughter, who is eight and in grade two. I'm not sure "data management and probability" were words I could even say at that age. (Then again, I did know what "carbon monoxide" was from my first favourite book.)

As for my other daughter, who is ten, she drew a picture the other day. It's taped to her bedroom door: 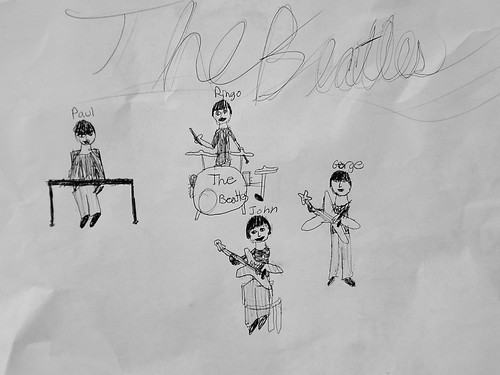 I liked the Beatles at that age too, but she loves them. I had no idea who the individual Beatles were, never mind what instruments they played—especially that Paul played piano as well as bass.

Notice that while John and George are playing their guitars left-handed, which isn't correct, Ringo's drums are frighteningly accurate. And even though his kit didn't have one, hers has a soundhole in the front drum head as most do these days. I guess my work as a drummer has rubbed off a bit.

That is a damn good drawing for a ten year old!

My sister (6) also loves the Beatles, but this is most likely a fallover from her father (52). However, she has decided that she's going to marry Paul. We're okay with that... and give her another 15 years, and he'll probably be ready for her.

That is a quite a good drawing. I remember listening to the Beatles as long as I have been alive. My parents were huge fans. My mother even confessed to me she wanted to marry McCartney.
Paulie from the SnakePit