After a year and a half, Stanley Park surprised me 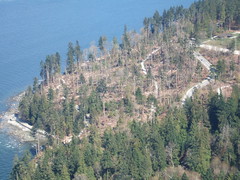 With all my cancer treatments and so on, I have, remarkably, not been to Vancouver's famous Stanley Park since the vicious windstorm that hit Greater Vancouver near the end of 2006, a year and a half ago.

Having been born and raised in this city, I think that's the longest time I've ever been away from the park in my entire life, until today. I was downtown for an errand, and decided to take a side trip in the car to drive through the park and see how things were going.

I was astonished. Toppled trees are still everywhere, and the stretch of Park Drive from Prospect Point to Third Beach is unrecognizable. What I always knew as a dense rainforest overhanging the road now comprises steep, open vistas across hundreds of broken trunks down to the ocean.

Rebecca at Miss604.com has been documenting the changes since the storm hit, so I had some idea what to expect—but not really. I'd like to take my bike down there sometime in the next few months and explore the trails again. In many ways, it's a whole different place now.

Mom and I took a walk from the Waterfront station of the Skytrain along the harbour to Stanley Park on Saturday. We then walked along the seawall underneath Lion's Gate bridge, past Siwash Rock, had lunch at the Teahouse, and then continued on through the park along Lover's and Tatlow walks to Lost Lagoon, and back to the Waterfront Station. As you say, there are still many areas with broken trees and the debris from that windstorm.

What we found surprising are the pockets of damage along Lovers' and Tatlow walks deep inside the park. There are big stretches where the park is undisturbed, and then you come to smaller areas were the trees are broken and splintered like matchsticks. It's reminiscent of the reverse of what tornadoes seem to do in the American midwest, where, among all the devastation, there are pockets of untouched areas. The closest I can come to an explanation is that there seem to have been little vortexes of very high winds in the small damaged areas in Stanley Park during that windstorm - maybe there were "mini-tornadoes".

My guess is it's going to take a while. We were hammered four years ago this September and it wasn't until a couple weeks ago that we were out for lunch and I noticed that there was foliage and green again, finally. That's just the greenery on the smaller trees and bush and mangroves. If you look around you can still see where trees' roots were submerged and the ground saturated where the wind just pushed it over and levered the roots straight up perpendicular to the ground. The trees are dead, turning grey (gray?) and will probably make good firewood... if anyone had fireplaces that is, and if anyone had the initiative to actually do it. Until then, they are going to be scars and reminders of just how powerful wind can be.

Although a lot of the more dangerous deadfalls have been removed, and some of the wood will be used in various public projects around the city, I think the general plan (and it's a wise one) is to leave most of the fallen trees to rot and feed new vegetation, which is how forests like Stanley Park naturally operate.