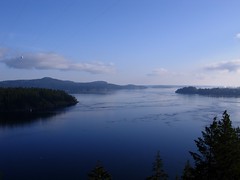 Back in the late 1950s, my mom worked for CBC Television here in Vancouver. One of the biggest events the network covered at that time took place 50 years ago today in the waters near Campbell River, B.C. on Vancouver Island: the Ripple Rock detonation, one of the largest artificial non-nuclear explosions ever created.

As described (and diagrammed) at The Taming of the Rock, the project was a huge effort, designed to remove the deadly navigation hazard of an underwater mountain in the middle of the Inside Passage. Nearly 1400 tons of Nitramex explosives were packed into chambers dug into Ripple Rock's twin peaks—not from above, but by miners who dug a vertical channel down to bedrock on neighbouring Maud Island, then a horizontal one underneath the seafloor across to Ripple Rock, then up again to the blast zones. Like a root canal. The digging took more than two years.

The explosion itself shortened the underwater peaks by almost 12 metres, making the channel at Seymour Narrows much more navigable and reducing some of the fearsome tidal currents and whirlpools that Ripple Rock used to generate. (The tides in this part of the world are some of the most powerful on earth anyway—in a shallow constriction, they can be as fierce as a whitewater river.)

You can watch CBC TV's archived live coverage of the event from April 5, 1958. My mother's friend Erlyne was one of the few women on that TV crew, though she's not part of the recording. She and my mom met at the CBC, and are still friends 50 years later.

Wow 50 Years! I remember as a little kid sitting in front of the TV with my dad, very excited about the event . Dad explained what was going to happen and that it might not work but we would not know until after the blast.I was very excited.

Thanks, Derek, for the memory.