Camcorders have changed in 10 years 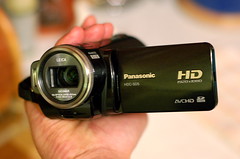 Over at Inside Home Recording, we recently started IHR TV, additional short video tutorials that augment our regular longer audio podcasts. As part of that effort, we used some of the money we get from sponsors and advertisers to buy two Panasonic HDC-SD5 high-definition camcorders. (Bought online, two of them cost only very slightly more than a single one at local retail stores.)

The last camcorder my family had, which sits half-broken in our basement, was an old Samsung analogue Video 8 tape-based machine, from 1998. Given the improvements in other consumer electronics, from personal computers to digital cameras to televisions, over the past decade, I'm not sure why I'm so surprised at this little camcorder, but it's a remarkable machine.

Consider, first, that it can record at 1920x1080i "Full HD" resolution, with something like six times the detail of our old camera, using a very nice mechanically stabilized Leica lens. It stores that information not on tapes, but on the same SD cards used by the still cameras and audio recorders we have at the house. The whole camera is only about a third larger, and almost exactly the same weight, as the old Samsung battery—being smaller than my hand, it almost gets lost among its accessories in our camcorder bag.

Perhaps most remarkably, Panasonic has put real thought into simplifying how the camera works. There aren't many buttons and dials, they're clearly labeled, and everything is easy enough to figure out that the manual (which is long and detailed, but only averagely written) is only necessary for some of the more detailed settings. The SD5 even takes pretty nice still photos.

Those huge HD videos, however, require a lot of horsepower to edit: only one of the computers in our house (my Intel MacBook) will even import the massive AVCHD video files directly. And, following the trend in pocket still cameras, there is no longer a viewfinder: you have to look at the pop-out LCD screen to frame your shots. Like too many consumer electronics today, the camera also comes festooned with garish and difficult-to-remove little stickers advertising its features, the software it comes with, and so on. I removed those immediately.

It lacks a couple of pro features that would be useful: the only sound-in is from the stereo microphone, so you can't connect an external mic or line-in sound, which is something I'll work around with a separate audio recorder if needed. (Very cleverly, though, the microphones can focus in on your subject as you zoom the lens, and electronically filter out some wind noise. Nifty.) Similarly, while it comes with cables to send sound and video out to a TV or other device, you can't record video from any source other than the lens, so I can't, for instance, use it to digitize any of our old footage.

With devices like these, it's no wonder people can now smuggle broadcast-quality video out of the world's war zones and trouble spots. We'll see what I can do with this camera and my mediocre video skills for our modest little podcast.

I peeked at the camera in a London Drugs. What a great camera.

Yup. I bought this little gem last spring. I am absolutely stunned of its output. Even a pro using Sony pro cameras was impressed.
Sadly, I have to upgrade my computer to edit the files...
(Found this blog through Flickr when searching for D700 photos...)