The real stakes of a U.S. election 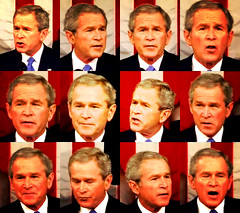 I've just finished watching the full online version of the first part of "Bush's War" (via Kottke), an extraordinary PBS Frontline documentary about the tactical battles and infighting within the U.S. federal administration between September 11, 2001 and the initial invasion of Iraq on March 20, 2003.

It is a multi-hour program, extraordinarily depressing, though not surprising. The sinking feeling I had back in 2002—as I slowly lost the belief that there were good intentions somewhere, anywhere in the call to war—comes seeping back as I watch it.

I recommend you watch "Bush's War." (I plan to check out the second part tomorrow.) It is election season in the U.S. again, and it's worth some time for all of us, inside and outside America, to remember what the real stakes of voting in that country are.

Holy crap. The second part of the documentary is even more depressing than the first. What a clusterf**k.