Alright, I finally did it. Off we went to the mall and I shaved my hair off! 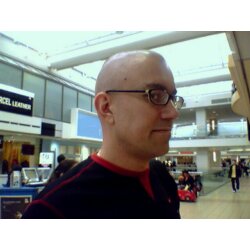 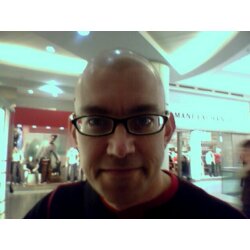 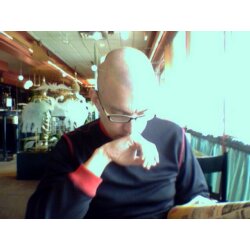 The chemo wasn't making me completely bald by itself—but it was thinning and greying my hair significantly. The manginess and relentless shedding of my hair (in the shower and on our pillows especially) was getting really, really annoying. Plus, it's as good a chance as any for me to shave my head, which I've never done in my life. Here's a nice set of contrasting pictures: 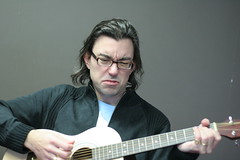 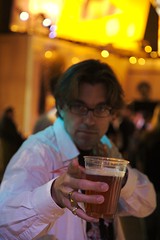 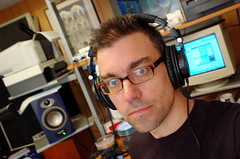 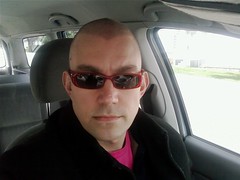 I like it! And I look more like my podcast co-host Paul now (or maybe Yul Brynner) too. Your thoughts?

That totally suits you!

I've always dreamed of doing that, but I couldn't quite get up the nerve. I'm waiting for my hair to recede, and then I'm going for it.

Did you go to a barber, or was this a home head shave? And how are you going to maintain it?

Thanks! I went to MasterCuts for the electric trimmer. Maintenance? Haven't thought of what I'll do yet. Probably let it grow a bit buzzier, and see what I like best.

my husband shaves his head. I think it's hot.

Welcome to the club... albeit not permanent in your case. Lookin' good on you!

We think you look awesome! It's true; you really suit that look :)

What I really appreciated about my shaved head (back in 2004) was that it took much less time to get ready to go out AND, except for puffy eyes, you pretty much look the same as before you went to bed.

It works for you.

I loved it (for a while at least). Houston was sooooo hot. So indoors I rocked out with my block out and outside I kept a ballcap on most times. It was weird getting used to sleeping with no hair.

I actually think you look very good in it (the new do, the shaved head is awesome). Great idea! And it's spring coming anyways :)

I do prefer the little photograph on top of your webpage to the mall-pictures, but that's because no-one looks good in mall lighting.

The photos in this post were also taken with a phonecam, while my new website portrait pic was from my Nikon DSLR, so that's also why it looks better.

I've thought about the shave thang for a number of years. Haven't quite been able to make it shiny, always opting for a little bit of cover.

I'd be curious to know about what it's like to live with -- maintenance, comfort after it starts growing back in, etc...

oohhh...nice skull shape! Not everybody's is that good. Like it, for sure.