A billion years, or 600 million, give or take 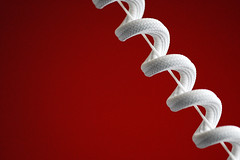 A friend of asked me today:

How does evolution explain something like DNA and how it's decoded? Natural selection/chance-change over billions of years doesnt seem adequate to explain it. Are there other evolutionary mechanisms that might explain it?

Also, DNA seems very clearly to be instructions/information. From an evolutionary standpoint, would that be an illusion because [we humans interpret] what turns out to be chance results as something more meaningful and organized because the result kind of works?

Now, beware, since IANAEBOP (I Am Not An Evolutionary Biologist Or Philosopher). I do have pretty decent background in biology generally, it being my degree and all, and that means I need to understand natural selection well. So here goes my take.

One of the issues here is that too often people talk about natural selection, including the initial appearance of DNA, as a random process. It's actually much the opposite: yes, mutations (i.e. the source material or "seeds" for evolutionary change) occur randomly, but the ones that persist because they lead to greater reproductive success are completely non-random. Non-random rules arising from natural processes filter out almost all the random stuff, leading to evolutionary processes that build upon themselves to generate new things.

But non-randomness doesn't have to imply conscious agency (at least I don't think so). Nor does it imply inevitability, or even directionality, really. If you rolled back the clock and started things over again with the first simple microorganisms, or at any later stage, even with essentially the same conditions, the result might very well have turned out very differently.

Evolution is a historical process, and like human history, there are so many inter-related, contingent influences going on that if we, say, started over again 75 million years ago with dinosaurs, even if an asteroid still wiped them out, there's no guarantee a human-like intelligence would arise later. Or if it did, that primates would necessarily be what did it.

Similarly, roll back farther, and would insects end up as the dominant multicellular animals again? Might woody flowering plants once more come to dominate over ferns and other now less common forms? Maybe not.

You can think of an analogy in something like the pattern of a streambed. Yes, the movement of individual water molecules or sand grains may be essentially random, but gravity and friction and a variety of other simple laws of nature, interacting in a very complex way, make it so that the result—the tree-like form of a drainage basin—has a very non-random structure. (If you drop something on earth, it falls down. If things were random, you'd have no way to predict which direction it would go.)

But, yet again, if you rolled back the clock and started the erosion process all over again, the stream's course might run in a very different direction. There would still be a tree-like structure constrained by natural laws, but the details of it would be totally different, so you couldn't plan to build a house or waterwheel or hydro dam in a particular location in advance.

The vastness of time

Another issue is time. Our brains really aren't well equipped to handle the kinds of time scales this stuff happens on. Something like DNA seems irredeemably complicated to have arisen by the hit-and-miss processes we're talking about. It's too well built. (Of course, the process also has its flaws, which is why people like me get cancer.) But we're used to watching stuff happen over the course of minutes or hours or days or weeks or months or years or maybe decades. The rise and fall of civilizations may take centuries. To us that seems like a long time.

Evidence seems to indicate that DNA first appeared pretty early on in earth's history. But it still took something like 600 million years, or maybe closer to a billion. Even if it were completely random (rather than a rule-driven process with random "seeds"), a lot of amazing things could happen totally by chance in 600 million years. And a lot of amazing things have happened in the 4 billion years since, some random, some not.

Humans have never witnessed a large asteroid impact on earth. As far as our actual experience (even on an evolutionary time scale) is concerned, it has never happened. But given enough time, tens or hundreds of millions of years, it pretty much must happen again, and it has happened several times before. So we can consider things impossible when, in the long run, they are inevitable, or at least probable.

Would DNA, or something like it, inevitably have arisen on earth, given enough time? We don't know, and can't know yet. That's why looking for unrelated life elsewhere is important: even if it's non-intelligent life, finding something that arose separately from life on earth would tell us that life-driving processes are at least reasonably likely in this universe.

Or maybe it really is nearly (but not quite) impossible, and it only happened here, once in all these billions of years there have been stars and planets. I hope not, but it could be.

Now, if you step back and ask why natural laws are structured in such a way that contingent, historical evolution can happen even once (or even why atoms and molecules can form at all in the first place, rather than just creating a universe that's nothing but a soup of plasma), that enters into realms of philosophy that I don't think we may ever be able to answer.

Many will answer that God must have made those rules. But if I think like that, I always have to ask: then what made the God (or gods) that could make those rules, and by what meta-rules? In my mind, it's the same problem, just one step further, so it isn't really an answer at all.

I'm comfortable enough thinking that life and the DNA that lets it propagate "just happened" (perhaps the greatest oversimplification it would ever be possible to make in any circumstance). And with observation and intelligence, we're able to understand very much about how things have happened since, without having to resort to supernatural explanations that, by definition, we cannot analyze because their rules must be inscrutable to us.

You hit on some really important points here, Derek. I've heard people try to argue that "random" events couldn't explain how life evolves as well - which clearly shows that someone doesn't understand what evolution is about.

Dude, I always love when you write on these themes in your blog.

Once again, bravo to your touch for presenting a complex scientific concept in a concise, honest, and still easily understandable way.

James Gleick's book "Chaos - making a new science" well describes a concept called "sensitive dependence on initial conditions", which stipulates that, given identical initial conditions, the most microscopic disturbance eventually causes vastly different results. I know that you've read this book, Derek, but other readers of your blog may be interested. The book was published by Penguin Books in 1988.

Sometimes this intial condition dependence is called the "Butterfly Effect" - the flapping caused by a butterfly's wing produces tiny, erratic air currents, which may eventually drastically alter the weather many weeks later.