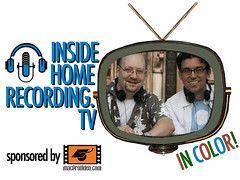 My Inside Home Recording podcast co-host Paul has been making instructional videos for macProVideo.com for some time now, and he's good at it. So when he proposed that we start putting out short video podcasts in addition to our regular audio show, I knew they could be useful.

Now we've posted our first episode of Inside Home Recording TV (IHR TV). This one Paul recorded entirely himself. It's about using Propellerhead's ReWire to link their Reason software to Apple's Logic Pro.

We're trying something new with this video podcast. As usual, you can subscribe to watch on your computer, Apple TV, iPod, Zune, or whatever. In addition to posting it on our own site, you can also find each episode free at the video sharing sites Revver, Vimeo, Blip.tv, and YouTube. Plus we post them to Facebook, and will note each new show (audio and video) at Twitter.

Oh, and you can find the videos at MySpace too, though I'm loathe to admit that.

All the recent iPods (except for the iPod Shuffle, which has no screen) support video playback. The shows have to be formatted very specifically for them to work -- but most podcast producers know that and have set up their shows to work fine. (The same videos will also play on Zunes, Sony PSPs, the Apple TV, and any computer using Apple's QuickTime or iTunes.)

So if you subscribe to the IHR TV video podcast and set up iTunes to sync with your iPod 5G, iPod Classic, new iPod nano, iPod Touch, or iPhone, it will simply show up on your iPod and you can play it.