Show off your geekiest photo

For no particular reason, I recently created a Flickr photo group called Your Geekiest Photo, and added mine, from 1985: 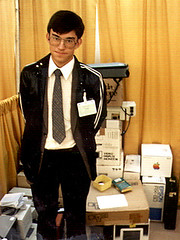 If you have a dark, dark nerdy picture in your past and don't mind revealing it to the world, I'd appreciate if you joined the group and added it. If you're not already a member of Flickr, you can sign up for free.

haha, that's a pretty geeky photo alright. Sadly, I don't think I have anything that comes close to it.

There's a terrifically geeky photo of me hugging my computer monitor at the age of twelve. I'm not sure where it is, but if I find it, I'll post it.

Well, considering that 1985 is the year we met, I think it's cute. Ok, I did burst out laughing, but that was more because it's hard to believe we were that young.

Your ears should be pointier.

Dude! That is the sweetest damn geek photo. Totally beats that Bill Gates promo photo for Radio Shack back when the Tandy was launched.