Chevron's gas pumps piss me off

This has bothered me for years. A couple of days ago I fueled up one of our cars at a Chevron station. Here is their self-serve gas pump: 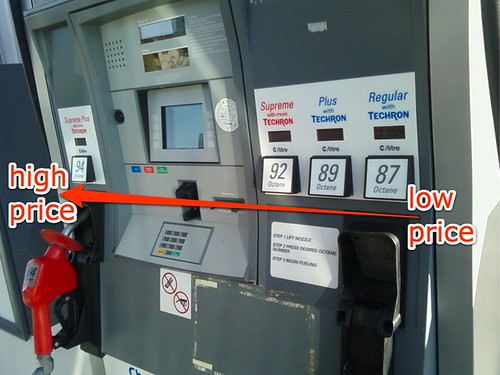 I'd like you to notice something—Chevron is trying to trick you. The lowest-priced fuel (87 octane) is on the far right. The price gets higher as you go left, with the highest-priced Supreme Plus fuel (94 octane) having its own separate nozzle, which is coloured bright red, on the far left side of the payment console. (The nozzle for the other grades is a subtle blue.)

I can think of only one reason for that, and it's one that's hostile to Chevron's customers. In a society where we read left to right, and would normally expect prices to go from low on the left to high on the right, this pump is designed to bamboozle drivers who are in a hurry and not paying close attention. In a rush, they press what they intuitively assume would be a lower-priced button (on the left), but actually get a higher-priced blend instead. That happened to me a few times when Chevron first introduced this style of pump a decade or two ago.

Worse, if you're particularly distracted, the pump for Supreme Plus can look like a separate single nozzle, and it's possible to pick the most expensive fuel without realizing it until it's too late. Up on the big price sign next to the station, we generally only see the price for the lowest-cost fuel, but the pumps themselves conspire to fool you into buying something that costs more. It's not a big thing to pay attention to if you want to avoid the ruse, but I notice a bit of a cognitive load when I encounter it. And of course, the digital price indicators have the smallest print in each section; you can hardly even see them in my photo.

Most modern economy cars—which is what most Canadians, like my family, drive—don't require anything more than the basic grade fuel. I fully expect that gas stations sell far more of that standard grade than their higher-priced varieties, so the design of pumps ideally should make it easy for the majority of people to find what they want. It might make the most sense for standard 87-octane blend to be the one with its own nozzle, and for the price to go up left to right overall. But that's not what's happening here.

Overall, Chevron is no more or less controversial than other oil companies. I like their claymation commercials and their Town Pantry convenience stores. But because of this pump design problem, I usually don't buy my gas at their stations.

I agree Derek. These are designed by someone who thought of sneaky ways to increase profits. Most places don't use them. I've found that two Petro-Canada stations on Highway 401, near Toronto, use this tactic. Most likely it is because they assume people are in more of a rush.

I've been caught by this the odd time but I usually pay attention if I am at a station I don't normally buy from.

I know of a gas station (in central Illinois, where I live) where the mid-grade fuel (89 octane) is the cheapest. Regular (87 octane) is 10 cents/gallon more.

It does make me wonder, however: is lower-octane gas actually cheaper to produce? It could be that 89 octane is actually less expensive to manufacture. But should they price it higher anyway, just to avoid confusion? I'm not sure on that one.

For that matter, is the difference of refining cost between grades actually significant at all in the overall cost of extracting, storing, transporting, and selling the fuel? It may be, but it does make you wonder...

Hmm. I always liked this because it means I can drive my car all the way through and stand nearest the gas cap thingy (brain cramp) while I'm pumping the gas -- all while still having space to punch in the PIN and watch my kids in the back seat.

However, I also walk the opposite direction of expensive items in London Drugs. So perhaps I am just odd when it comes to shopping.

There's no consistency in the position of gas caps on cars (our two cars have them on opposite sides, for instance), so for everyone like Andrea for whom this would be convenient, someone else would find it inconvenient.

Riiiighht. Trying to trick you. With that distinctly coloured handle and clear label. Are you pissed at grocery stores who put high-profit items on end-caps or put the milk at the back to make you walk past other products too? It's called marketing, and if it's truly deceptive it should be criticised, but that's the case here.

I'd have to disagree with you. It is deceptive. Both the grocery store example you cite and the gas pump here are examples where the motive for profit works against the interests of the customer.

The gas pumps do cause people to spend more than they planned to, at least occasionally. It's happened to me, and I don't think most people who know me would consider me naive or dumb. Once I had it happen a couple of times, I did two things: (a) I paid more attention, (b) I avoided Chevron most of the time.

Indeed, so is it when grocery stores put all the commonly needed, lower profit items (milk, meat, etc.) at the farthest reaches of the edges of the store, with the higher profit impulse items on the way, or featured. Unfortunately in that case, pretty much all grocery stores do it, so we as customers have little choice. And few people are aware of that design either.

I've worked in both marketing and interface design. One principle of good UI design is, as Steve Krug writes, "Don't make me think!" That's not because people shouldn't think, but because it's better if they apply their brains to important things, rather than on unnecessary obstacles to doing what they want to do. Marketing often has to oppose that in order to try to make more money. As customers, we should be aware of that, so we can make choices against it if we wish.

I'm wondering what the other side of that pumping station is like? Is it configured the same way or is it mirrored? If it were mirrored then the other side would read left to right (low to high). I have seen it mirrored before but I can't remember which station I saw it at... Sunoco? (I'm in the US, btw).

FWIW, there may be no pattern to which side of a car holds the gas tank, but there is a correlation to the "gas pump" icon on the dashboard. If the icon has its hose on the right, then your car's gas tank is on the left, and vice versa -- so that as you approach the gas station from the proper direction, the pump you see out the front window will match the one on your dashboard.

Yep, that's what I use to check on our cars every time, since I can never remember. Of course, it has no bearing on how Chevron designs its pumps, since whatever argument for utility there might be would only work on 50% of cars.

OK people pull your head out, open your eyes and watch what you are doing. Everything is plainly labeled. What more do you need?