Did humans kill off the woolly mammoth? 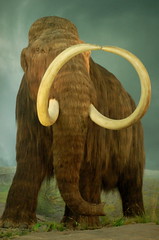 There's long been speculation that as humans moved into Arctic territories (as well as into North America), we were primarily responsible for the extinction of the woolly mammoth about 12,000 years ago. Other researchers have favoured climate change at the end of the Pleistocene era as the main reason they disappeared.

New research indicates that, in Eurasia at least, the answer is probably both. Mammoth populations fluctuated hugely throughout the Pleistocene, dropping to levels even lower than their pre–human contact point as much as 125,000 years ago, during a warming period.

But when humans entered the picture millennia after that, as the Ice Age glaciers were melting, mammoth populations were again low, and our hunting activity likely slowly picked the big pachyderms off.

The last woolly mammoths to die off were amazingly recent: a dwarf variety survived until less than 4,000 years ago on Wrangel Island, in the Arctic Ocean off the desolate far northeast coast of Siberia. That human hunting had a role in their demise is no surprise: quite often, when our species has moved into new areas (especially isolated ones), we exterminate species that live there, especially large yummy ones.

Maoris eliminated moas from New Zealand not long after arriving between 800 and 1300 A.D. (moas were gone by 1500, a couple of hundred years before Europeans started showing up). Similarly, dodos disappeared in the late 1600s after humans arrived on their home island of Mauritus. And we're doing an effective job of bringing a variety of big species, from blue whales to Siberian tigers—and many other organisms too—close to the vanishing point today. Only rarely, as in the case of the smallpox virus, do we do it on purpose.

It's possible that woolly mammoths might have disappeared even without us as the Ice Age ended. But we very likely speeded their extinction along.

Humans might have helped with the extinction of the mammoths, but I have my doubts.

For one thing, mammoths had been living with humans in Europe since humans left Africa, so why didnn't they die out there thousands of years earlier, and why did they die out there at the same time as they died out in North America?

The humans who arrived in North America towards the end of the Ice Age did not instantly thickly populate the continent, so how come mammoths died out where humans hadn't reached yet?

How come the mammoths died out at the same time as the other largest animals, such as the wooly rhino, giant sloth, giant bear, and sabre toothed cats, whereas yummy, more easily hunted large animals such as caribou, musk ox, and bison did not?

When you compare the extinction of Ice Age mammals with modern exinctions, a hunter gatherer society has a completely different impact from destruction of habitat and mass killings.

When you compare it with the demise of the dodo and the moa, it's again different. The flightless birds had not previously had large predators, and the humans arrived in overwhelming numbers. The Maoris arriving in New Zealand was a very different event from humans arriving in North America - it was not a few people on a huge continent, it was a massive migration onto small islands.

I don't think one can be used to prove the other.