A few days ago I wrote about the 50th anniversary of the Ripple Rock detonation, which sent me hunting around the Web for information. Inevitably, I came across lots of pictures of explosions of all sorts.

I think many people in a broad cohort around my age (38), who grew up during the Cold War, have a morbid fascination with photos of nuclear bomb tests. Some of them are chillingly, starkly, awfully beautiful, especially this set from the French Licorne ("Unicorn") test in the Pacific in 1970: 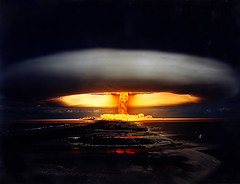 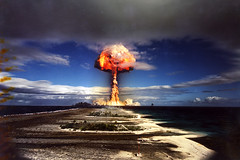 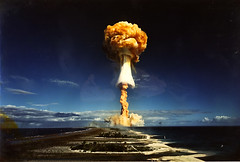 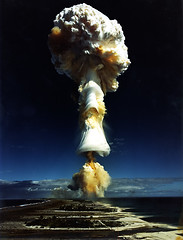 Reports say that the day of the Licorne detonation had "cloudy conditions but good visibility," but notice how the bomb's shockwave punches right through those clouds, sweeping them entirely away and leaving blue sky in the later pictures. Scary.

Of the hundreds of above-ground nuclear detonations by the U.S., the U.S.S.R., the U.K., France, and China between 1945 and 1980, no two seem to have looked the same. The photographs that freak me out the most are those where the surrounding landscape (and thus the scale) is clear. Or where soldiers walk towards a mushroom cloud in the Nevada desert.

China performed the last atmospheric test of a nuclear weapon almost 28 years ago—these sorts of photos are all, thankfully, now historical. But North Korea conducted what may have been a failed atomic explosion uderground as recently as 2006.

So those mushroom-cloud images don't worry me like they used to when I was a kid. But the worry isn't entirely gone either, is it?

My grade 7 teacher spent a lot of time hyping the Cold War to a class of already scared 11- and 12-year-old kids. By his telling, there were communists hiding behind doors throughout the neighbourhood. We'd go for a walk and he'd point out the homes of potential communists. He also made all the "gifted" kids do year-long projects on communism...pretty depressing stuff for that age, since we didn't get to do anything like Cuba and all the Cold War propaganda made communists seem crazy. My father and mother were quick to point out that the communists love their children too. I'm glad to have grown up to have two former "communists" on my work teams and to have my kid go to preschool with other former Soviets...some of the nicest people I know.

Lots of early atomic-era video clips at the Internet Archive.

One example: "Optimistic vision of fallout and civil defense countermeasures."