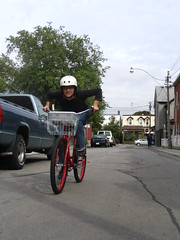 CBC Radio has two programs (also available as podcasts) that confuse me a little: "Spark" and "Search Engine." I like them both, but they seem to cover a lot of the same territory of life in the digital age. Sometimes I can't remember which one had a particular segment—was it host Nora Young at "Spark" who interviewed the guy who edits Hillary Clinton's Wikipedia entry? No, it was host Jesse Brown from "Search Engine."

I suppose it doesn't matter. I'm glad there's enough of an audience for my kind of techie social nerdity that CBC has two shows about it. Yay again to Tod for helping the network get on the podcasting train after jump-starting it with the CBC Unplugged show almost three years ago.

Anyway, I'm going to call "Spark" my favourite of the two shows now, because it looks like I'm going to be on it. Nora—that's her on the bike—indirectly heard about my recent talk on life, death, and my blog, and contacted me through Facebook (appropriately enough) to see if I might like to be on "Spark."

One of my weaknesses is appearing in the media. I've always loved seeing my name in print, or being on the radio or TV. So my immediate thought was, "hell yeah!" We'll likely record something next week for the "Spark" episode airing (and podcasting) at the end of the month. More details to follow.

Incidentally, Nora's other podcast, The Sniffer (not affiliated with the CBC), has been on my subscription list for a couple of years now. I recommend it.

Congrats! I'll admit it, I kind of have a crush on Nora Young.

I started listening to both shows from the beginning (maybe I got pitched?). Maybe it's because of that, but I have a clearer delineation in my head. It's tricky to articulate, maybe, but "Search Engine" only covers the Web, while "Spark" covers emerging technology.

Plus, "Search Engine" almost always comes with a sense of righteous indignation, which gets a bit old after a while.

If a show is going to have Cory Doctorow as a regular columnist, righteous indignation is pretty hard to avoid. I get indignant just looking at his glasses.