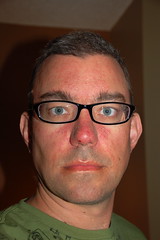 First of all, before you read on here, please head over to Raul's and Rebecca's sites, as well as others who are doing 24 hours of continuous blog posts for Blogathon 2008 today. Raul, in particular, is raising money for cancer research, and so both my wife and I have contributed guest posts to his site. Here's mine. Read it and then maybe donate some money if you feel like it.

Anyway, we're coming to the end of our idyllic week here in Whistler (courtesy of my aunt and uncle who own the apartment), and I'm glad it's been generally restful, because the brand new rash on my face that has developed here (an expected and inevitable side effect of my new panitumumab anti-cancer drug) is harsh and brutal and it sucks.

The pimples and redness came on shockingly fast (as they are supposed to), mere days after I received my first dose of the drug last Thursday. They're worst on and around my nose and on my forehead, although they extend up under the hair on my head, down my neck, across my chest and shoulders, and onto my upper back. The rash looks pretty gross, and sometimes feels even worse. Bleah.

KA asked me how sensitive my skin is. The best description is that feels like a permanent sunburn, and my nose in particular feels like a big raspberry. Sometimes I'd like to take a belt sander to the entire front of my head, but no, I shouldn't squeeze or even scratch the pimples. The best I can do is the occasional gentle rub, and a wet washcloth from time to time. I do have hydrocortisone and antibiotic cream that I apply twice a day, and they help. The L'Occitane cream my wife Air got me also does some good, though it stings at first.

What's dismaying is that my face might actually look better smeared with white goop than it does without—the cream helps hide the rash itself. Until now, I don't think I've ever in my life been genuinely embarrassed by my appearance. I didn't have bad acne when I was a teenager, and while I've always been a nerd, I've thought of myself as a decent-looking one. Now I walk around Whistler and consider whether people are looking at my face and wondering what's wrong. When I buy something at a store, I have to remind myself to look people in the eye, because my instinct is to turn my eyes down and avoid a direct gaze.

But when I look in the mirror, I realize that while the rash does look gross (pimples, dry skin, little scabs, ew), it feels worse than it looks, especially from a distance, and I shouldn't be too self-conscious about it. And I'm sure glad my wife and kids are still willing to hang around with me.

Overall, it is extremely unpleasant, considerably worse than I expected. I'm amazed how quickly the rash came on after I started getting the medication—but the people at the Cancer Agency did warn me, and said that a serious rash is a sign than the panitumumab is doing its job. It's some nasty shit. Hopefully, it's even nastier to the cancer than to the rest of me.

My colitis has caused rashes on my face. I once had what appeared to be impetigo (it wasn't it was pyoderma gangrenosum) take over the lower half of my face. Then last year I had two boil like things below my eye that were also pg. When I was on massive doses of prednisone for the pg and the colitis my face swelled so much that it hurt and I was mortified if I had to go out in public.

Hopefully, this too will pass quickly and that the chemo drugs are doing their job!

Oh yeah, this crap just keeps getting better. But you know, it's still an improvement over where I was one year ago.

I'm just amazed at all the new and exciting side effects these medications can generate. I wonder if I'm going to start glowing in the dark one of these days.

All I can say is, don't worry about how you look, because it looks worse in the mirror to you than it does to everyone else. Besides, you're a good looking guy, you can get away with it.

Thanks so much for your post, Derek, and for all your help.

The side effects may have had an effect on the surface of your skin, but most definitely, they haven't done anything to your soul. You are most definitely a very courageous man and an example to all of us.

AAAAND.... a great podcaster. Thanks to your post, I now know a bit more about Audacity and all those PC-based tools. I am still hanging my head in shame for not being on a Mac :(

Sorry to hear you are having such a rough time but hopefully it is all for the good. I glad you guys are all enjoying your nice restful break in Whistler.

Oh, that does look painful! Back in 1998 I developed some resilient hives for which they ended up putting me on the steroid Celestone. They did not tell me about the rash that could develop afterwards... which was very similar to this. When I returned to work, I had people ask me if I had splashed my face in acid, it looked so bad! Eventually, I had to go on Accutane to get rid of it. I, also, was mortified to go anywhere because of the rash, and caked makeup onto my face to try and hide it.

I hope your rash clears quickly and this new drug is doing its intended job, despite the annoying side effects.

Thanks for the Blogathon link love. Sorry to hear about unpleasant side effects you're experiencing but am glad you've had a nice getaway with the family regardless.