UPDATE: By some miracle (and no, I don't know what I did), one last try at installing the software worked at around 12:30 p.m., and I managed to load on some video and audio, plus podcasts, onto the Zune device. I'm going to transfer a bunch of my daughter's MP3s and let her give it a spin to see what she thinks of the Zune now that it's working, more than 24 hours after I first started trying. 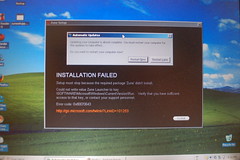 It's been a few years since I used Windows regularly, but as a typical Mac fanboy I do have to ask: do those of you who run Windows regularly actually have to put up with this level of frustration all the time?

Right now I'm staring at the Zune installer program screen, telling me for the fourth or fifth time that it "Can't access Microsoft Update" (I can access it fine by going to the website, by the way). This is on the second computer I've borrowed from my dad to try to install the Zune application. Yesterday I spent something like nine hours (on and off, mostly off, thankfully) trying, repeatedly failing, and then eventually getting the Zune software to install on his older Windows XP laptop. And then, at the end of the day, while the computer itself could see that the Zune player was connected, the software never did, and I could never sync anything to be able to play it.

Having worked for a Windows software developer at one point, I have decent Windows tech-fu techniques, which I employed during yesterday's mess, even creating a new user account before the software successfully ran. Yet here I am again, needing to put the same skills to use once more the next day to get a Microsoft product working with a Microsoft operating system, because yesterday all of my ninja skills weren't good enough to get the music player to, you know, play music.

It's a pity. I like the Zune as a piece of hardware. It's cute, the packaging is nice, it seems well built, the premium headphones are really quite elegant (if bass-heavy). Yes, the Zune design team has tried way, way, way too hard to ape the iPod Nano—the one that's two generations old now, by the way—even down to the "Hello from Seattle" etched into the back in place of "Designed by Apple in California." They've made the hardware as close as they can get to an iPod without getting sued, I think.

The Zune pad that replaces the iPod scroll wheel is good, and the onscreen interface is nice indeed, smooth and useful and (for once) different. What I've seen of it, anyway: I've been unable to do anything with it, not even listen to FM radio, because the Zune (unnecessarily, I think, like the iPod too) needs to be set up from a computer first. Which is my whole problem.

If you buy an iPod, is setting up iTunes on Windows this bad? I've never done it, but I may try just to see how the experiences compare. If it is, I'm sorry, and it's a wonder that anyone ever uses a portable music player. At this point, if I'd actually paid money for the Zune, I would have returned it by now, since for the past day it has been an attractive electronic paperweight, and not a sufficiently heavy one at that.

But for now, as I've been writing this rant, I've used one of my Macs to download the full Zune installer package and move it to my dad's XP laptop using a memory stick. It seems to be installing. Perhaps by the end of this paragraph I will know if the Zune software can see the Zune player, and maybe let it play some music or videos...

Nope. "INSTALLATION FAILED. Could not write the Zune Launcher to key \SOFTWARE\Microsoft\Windows\Current Version\Run." What a lovely experience, and waste of my time.

I didn't even notice the 'Hello from Seattle' bit...zing!

Hopefully you get it running...I just posted my initial impressions.

Is it possible that you are using a version of the zune software for vista on an xp machine??

Setting up iTunes on a pc has been a snap everytime I have done it. I don't seem to have a great deal of difficulty getting anything to work on a pc. It does seem strange to me though that a microsoft piece of hardware is not working with windows. You would think it should just be plug and play.

What a PITA! I have a PC running Vista, and have had no problem at all setting up itunes and managing music on two separate ipods using the itunes software. A shame that the Zune is having such a hard time installing.

At last it worked. My daughter is playing with the Zune now. She likes it, especially after being jealous that her older sister has been using my wife's iPod Nano! :)

What was the problem?

Heck if I know.

Using iTunes on Windows never gave me a problem, although I had plenty of headaches setting up a few other music players.

Of course, I've since switched to a Mac. No headaches since I got it in May.

Funny, I've had huge battles with iTunes on Windows, but the Zune software just dropped in for me.

Must be something about having big piles of old school MP3s.

Either way, I have both working now, but never seem to get either one prepped before I leave town for another trip. They're rarely used.