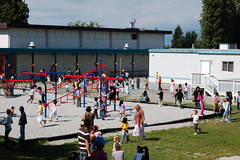 My two kids attend the same elementary school I did 30 years ago. Although there is a recent addition, constructed since my older daughter began there in 2003, plus some ongoing seismic upgrading, the building hasn't changed much at all. (It was a relatively new structure when I started there in 1974.)

It was always a good neighbourhood elementary school, but one thing that has improved dramatically is an aspect of the social environment. The first week of school has all the students in mixed classes with others of various grades: final class assignments don't come until the second week. Throughout the year, the school organizes events and regular volunteer jobs so that more senior students (grades four, five, six, and seven) mentor and support younger students (kindergarten through grade three).

The consequence is that students get to know each other across all eight class years in the school. Even in grade one, my daughter was able to wave and say hi in the hallway to grade seven students she knew. And now that she's in grade five, she has buddies in lower grades. Her sister, in grade three, knows kids both older and younger.

That's a big change from the '70s: when I started, grade seven students were scary and huge and intimidating unknowns. They remained that way pretty much until I was in a split grade six-seven class years later. And by then I had no idea who the little kids were.

I don't know if this is a common change in elementary schools in Greater Vancouver, or Canada, or more generally. Our school administration has put a lot of effort into helping students understand their peers of all ages and background. Of course there is still bullying, and fights break out, but no more (and perhaps less) than I remember. I think that overall it's more of a community than when I went there.

Our school in Kelowna also does a buddy system thing. All the early grades have older 'buddies' and, starting in grade 3, they also have younger buddies. My son, in grade three, is a buddy to a grade one student, and he has a grade five who is a buddy with him. The grade sixes supervise the kindergarten students at lunch time, etc, etc. So it seems to be, at least, a province-wide program.

My second elementary school had a buddy program. I don't think any of the Grade 6s were bullying the Grade 2 buddies. However, they were beating the snot out of other kids. The school largely tolerated that, though. I'd like to think more teachers and administrators speak up now.

They do the same in my daughter's k-8 school here in NB. Not with the firt week mixers, but with reading-buddy programs and the like.

At one of the elementary schools I went to they really promoted volunteering in the higher grades (I was there 5-6). I remember being part of "safety patrol" (walking kids across a busy street, complete with reflective gear) and I worked in the school library. I even got to skip all of art class in Grade 6 to help out in a Grade 2 library session each week. That was reason enough.

Come to think of it, I never saw it as "work" or "volunteering" or anything, though it was voluntary. Maybe we liked how good and grown up we felt to be given responsibilities and be appreciated by teachers and younger students.

I found it sad when I switched schools in Grade 7 and went to one which didn't have any such programs. I kind of felt lost, with nothing to do during recess and lunch.