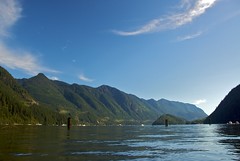 Indian Arm is a forbidding, steep-sided wild fjord, which is nothing unusual on the British Columbia coast. What is unusual is that I can see it (or at least the mountains that surround it) from my front window. Mere minutes from Vancouver's urban sprawl, the waters of the Arm are frequented by boaters of all sorts—but the slopes rising from its shores are too steep and rugged, and almost no one ever traverses them.

Back in 2003, engineer, rock climber, and trailbuilder Don McPherson completed his project of many years: a trail around the entirety of Indian Arm. But it's no stroll, nor even a hike. The "trail" is really simply a route, a roughly marked, 70 km, four-day (minimum) slog up and down mountain ridges, along cliffs and valleys, and through thick forest. The elevation map is insane. McPherson himself writes:

There's an endorsement. His "easy way" (from west to east) starts 1000 metres up Seymour Mountain (there's a parking lot for the ski area), ascends to near its summit, and then follows the alpine ridgeline of the mountain range behind. All that climbing and dropping means that, if you walked the whole route, you would ascend and descend as far as if you were climbing 14,000 ft Mt. Rainier in Washington.

I will never hike that trail, which is one reason it fascinates me. Years ago, I rode a mountain bike route along logging roads from Squamish to Indian Arm, which ended at the fjord's northern tip. But we had booked a water taxi to return us to Vancouver, because McPherson's crazy trail would have been the only path directly back, even if it had been finished back then. There has never been a road, and probably never will be.

Vancouver is a substantial city, but we have always been a city at the edge. To the west lies Georgia Straight, then the Pacific Ocean. To the east and north, craggy and glaciated mountains as rough as anywhere. Indian Arm makes sure we don't forget it.