Today, it's Japan, China, and India at the Moon 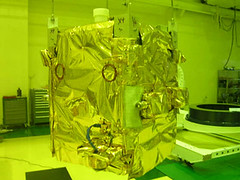 Remember when the U.S. and Russia were the only countries with space programs and their own rockets? Then came the European Space Agency, mostly launching commercial satellites from French Guyana. Somehow my 1970s kid brain is still stuck in that mindset.

But it's wrong, wrong, wrong. Yes, the U.S. still sends plenty of astronauts into orbit, and has wonderful robotic probes venturing throughout the solar system. But how about the Moon? As far as I can tell, the last time America sent anything to the Moon was ten years ago, when the Lunar Prospector orbited, then intentionally crashed into a crater to test for water. Russia hasn't sent anything since the Luna 24 probe in 1976. The ESA was there more recently, with its SMART 1 five years ago.

Who is sending spacecraft to the Moon now? That would be Japan, China, and (most notably today) India, which hit the moon with a flag-painted impact probe sent from its Chandrayaan-1 lunar orbiter mere hours ago.

The U.S. has a lunar orbiter scheduled to launch next year, and both it and Russia have grand plans to send people back, but for now, it is the countries of Asia that are telling us about our nearest neighbour in space. I think that's pretty cool.