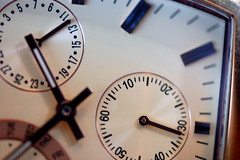 I like what the team at Digital Photography Review have to say about the world of digital SLR cameras (my emphasis below):

...the biggest issue facing manufacturers today [is that] ever-increasing sensor resolutions are simply not being backed up by lenses capable of delivering enough detail, [so what are] all those extra megapixels [...] supposed to achieve (other than take up storage space and slow the camera down). [...] we'd rather see manufacturers directing their R&D resources towards improving sensor efficiency, to give reduced noise and increased dynamic range, rather than continuing the megapixel marketing mania.

What Andy Westlake is saying is that, especially for the crop-sensor DSLR cameras most people buy, even the best lenses that Nikon, Canon, Zeiss, Leica, and others make don't provide enough resolution to take full advantage of all the megapixels packed onto the sensors in the cameras they connect to. Certainly the inexpensive lenses that most DSLRs come with don't do that.

For a long time, I used my 2006-era Nikon D50, which has "only" a 6-megapixel sensor, in reduced-resolution mode, taking pictures that were a bit over 3 megapixels. They were big and detailed enough for me as an amateur photo enthusiast, but I eventually moved up to the full 6 MP resolution when I got a bigger hard drive and didn't mind the extra room that larger files sucked up. So while I lust after the improved low-light performance and faster burst modes of newer cameras like the D90 and D300, their increased resolution on the same size sensor actually turns me off a bit, because of the extra storage I'll need for the images. (They do have reduced-resolution 6.9 MP and 3 MP modes, however.)

It is true that a 12-megapixel crop-sensor DSLR still gives you a significant real resolution advantage—when using quality lenses. But pushing up to 15 MP and beyond, as crop-sensor DSLRs are starting to do, seems to be going further than what our lenses are capable of. (As DPReview notes, that won't happen for full-frame DSLRs until they get into the 38-megapixel range, which I expect in the next couple of years.) In the point-and-shoot market, with even smaller sensors and smaller, lower-quality lenses, the problem is worse.

Until recently, Nikon has generally resisted the more-more-more megapixels bandwagon with their DSLRs—more so than Canon, Sony, and others—and emphasized performance instead. But I wish all of them would look at the example of Panasonic's recent DMC-LX3 point-and-shoot: "Other cameras offer more pixels, more zoom, and bigger LCDs," says review Jeff Keller, "[but it] does deliver very good quality images for a compact camera."

That's what we photographers really want, isn't it? Good pictures? Especially if we're paying for megapixels that out-resolve our lenses, and are therefore largely going to waste!

Much of this is moot if you're throwing away resolution via JPG compression anyway. (That's on top of the dynamic range you're throwing away when you shoot in JPG). Your biggest bang-for-the-buck, by far, is to start shooting raw. Storage is so cheap that it really shouldn't be much of a consideration unless you're going on a long safari or something.

If you use an app like Lightroom or Aperture (or even iPhoto?) you'll get raw processing for free.

Only then, spend money on better lenses.

Very good point, Jeffrey. RAW takes the data directly from the camera sensor without interpreting or compressing it. Yes, iPhoto includes RAW processing just as Aperture, Lightroom, Adobe Bridge, etc. do. With all of them, you often have to wait some weeks after a new camera comes out before its RAW format is supported (because manufacturers always change the format!), but otherwise it's by far the best way to keep your data. Adobe's DNG Converter is handy, because you can convert any supported RAW format to the open-specification DNG ("digital negative") RAW format instead.

If you don't want to lose the data in JPEG compression, your storage problems are only compounded by RAW, though: first because you can't use reduced-resolution modes, only the full resolution of the sensor, however high that might be; and second because each pixel in a RAW image takes up several times the amount of disk space of a compressed JPEG pixel. So if you get the latest super-mega-biggie resolution DSLR, your RAW files are much bigger than those from a camera with lower resolution (and perhaps less image noise), maybe to little effect if your lenses can't support all that resolution.