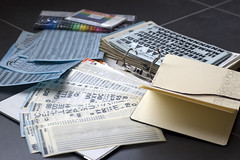 Graphic designer Michael Bierut is more than a decade older than me, but still, his article in the New York Times (via Kottke) this week felt familiar. I realized that's because, even though I've only hacked around the edges of the business of design and layout, I've been doing it for more than 30 years in some way or another.

More importantly, I belong to what is probably the last generation to straddle the gap between pre- and post-computer design. In elementary school in the 1970s, we made student newspapers with pens on Gestetner mimeograph paper, reproduced on smeary blue-inked sheets just like our notices and test papers. (More than a decade later, I had a used hand-crank Gestetner in my basement to run off newsletters for my computer club the Apple Alliance—there's some irony, or at least foreshadowing, in that.)

By the mid-1980s I was printing out long columns of dot-matrix type to cut and paste (with actual scissors and glue) onto photocopy masters, while also using Letraset rub-on letter stencils for headlines. That was for student newspapers—but putting together our high school annual still involved typewritten text, printed photos, rubber cement, and grease pencil. The real work of typography and layout was left to the professionals we never met at the printing plant in Winnipeg. We had perhaps two or three choices of typeface.

A few years later, the Science Undergraduate Society at UBC had an IBM PC clone with Ventura Publisher, and then a Mac with PageMaker. The only laser printer available was downtown, so I took floppy disks down and paid several dollars a page to print out 8x10s, which we then lined up to assemble tabloid-style layouts on blue-lined layout sheets. I drove those down to the printer to produce some of the first issues of The 432.

By the early '90s, everything was digital until the presses rolled, and a few years after that even floppies or CD-Rs were passé in favour of email and FTP. This decade I've hardly done anything for print at all: what little design work I do is for the Web, or podcasts, or maybe a PDF file that might get printed. Maybe.

So for me, a desktop, rulers, pica scales, cut and paste, cropping, and so on represent memories of the real physical activities. My kids may do some similar things for art projects, and with their grandmother when creating cards and photo books in her crafting room in Maple Ridge, but I don't expect they ever will for publication. Why would they, when we have six Macs (and two laser printers) in the house?

I am always amazed at how often I have to explain what a "signwriter" is. You'd think the term would be self-evident.