Here's a measure of our world. My daughters chose some new plush toys for themselves today, bought with their own money. Both animals the toys represent (a penguin and a koala) are from the southern hemisphere.

They girls dressed them in a cowboy hat and Irish green clothes in honour of St. Patrick's Day next month (for Sparky the penguin), and stereotypical Canadian getup of plaid winter hat with earflaps, fleece vest, and red "Canada" shorts (for Ringo the koala): 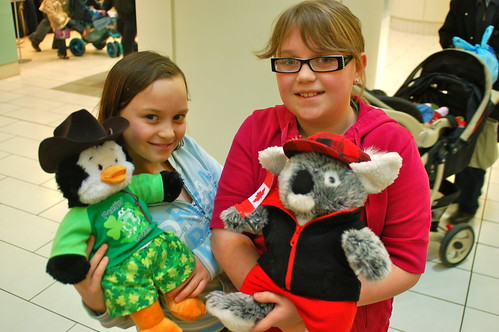 So we have an Antarctic aquatic bird in Irish and American clothes with a semi-American name, and an Australian marsupial in Canadian gear with an English name. Oh, and if you squeeze Ringo's hand, he roars like a Tyrannosaurus.

Hey Derek. Interesting that the koala roars like a T-Rex. They do bellow, you know. I remember as a kid, at camp in the Grampians in Victoria, the sound of a koala crashing through the bush, bellowing as he went (very load). We didn't know what it was until he scampered up a gum tree close by. It was quite a scary noise.

Our kids have been using it for years, and it's not uncommon. I think we called them "stuffed animals" when I was a kid, so the contracted version must have emerged in the past couple of decades. If you don't have children you might not run into the usage.

My brother and I called them stuffies back in the 70's...maybe we invented it! ;)