Deep bathtubs and the sound of surf 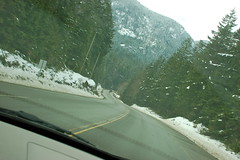 I still have some more photos to upload, but early this evening we got back home after seven and a half hours and nearly 300 km by car and ferry returning from Tofino and Parksville. It was a great trip, one that will leave memories. As a nice capper, we managed to meet up with my friend Simon on the ferry in Nanaimo and, once we crossed the water, gave him a ride into West Vancouver to visit his family.

We live in a huge part of the world. I mean huge oceans, huge mountains, huge trees, huge birds, huge beaches, and huge distances. At highway speeds (except for the really twisty parts, and lunch), it took us three hours to drive in the rain about half the way, across one of the narrowest parts of Vancouver Island. It's apparently a faster trip right across Ireland. We passed between snow-blanketed mountains 1400 m high—taller than any in Britain, to make another cross-Atlantic island comparison.

It's common for us British Columbians to take day trips or short vacations over distances that would cross several countries in Europe, as my family did this week. I'm glad to be home, but as I noted on on Twitter, I miss the huge, deep, comfortable hotel bathtubs. And the heated tile floor in Tofino. And the sound of surf, gentle or roaring.