A bit of a shock 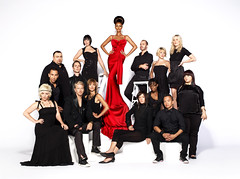 Our friend Kim is one of the designers competing on this season's Project Runway Canada, so we've been watching the show since it started a few weeks ago. It was filmed last summer in Ottawa. At the end of this Tuesday's episode, I was shocked to see an announcement that one of the designers, Danio Frangella (who left during the first episode because of health complications) died last week of cancer. He was 34.

He was not in good shape during that first episode, because he'd been undergoing cancer treatment for seven years, and had trouble walking because of his leg ulcers. Learning that he had died gave me a chill, because of course I have cancer too, and have had it for a couple of years now. Indeed, this week it is exactly two years since I began my medical leave from work. Two years!

If you haven't had cancer or known someone with it, you tend to assume that once someone gets it, they either get treated and go into remission (or are cured), or they die pretty swiftly. Those aren't the only alternatives. Many people live with the disease for years, sometimes decades, undergoing treatments and adjusting their lives around their symptoms and side effects. Danio was one of those, and so am I.

Even successful treatments may not be what you expect. Most statistical studies look at cancer treatments as successful if their subjects are still alive after five years—you often see "five-year survival rates" in such studies. I suppose that's fine if you're a researcher, or if you're a cancer patient in your 70s or 80s.

But if you're not yet 40, like me, or like Danio, five years isn't a very long time. I have a decent chance of surviving five years past my diagnosis, but that's not enormously encouraging, not when most people my age are thinking ahead a lot more than five years. I'm already almost half-way to the five-year mark. All the medications I've taken since 2007 haven't done what they really need to do, which is stop or reverse the nine small metastatic tumours still growing (slowly) in my lungs. On the other hand, I've also already lived longer than a lot of people diagnosed with my sort of aggressive colon cancer do.

One of the first things my gastroenterologist Dr. Enns told me back in '07 is that while there are tons of statistics out there on cancer survival rates, no one person is such a number, and the statistics can't predict how one person's disease will progress, or how long they will live. Just yesterday my oncologist Dr. Kim noted that research shows physicians to be notoriously poor at predicting life expectancy for cancer patients—no better than patients do ourselves, and in many cases no better than a wild guess.

As I wrote recently, I have "months certainly, years quite possibly" to live. How many years, I don't know. Nobody knows. Will I see my kids graduate from high school, or reach my 20th wedding anniversary with my wife in 2015? It's possible, but unless a new treatment starts working, or I go into remission because of lifestyle changes or another reason in that time, it may not be likely.

Then again, some people die young in car crashes or for other reasons, never anticipating their last day, or their last minute. If I'd been born 100 years ago, I would probably have died in my early 20s from diabetes, and might never have married or had children, or even seen a website, let alone built one like this. And if I lived in Swaziland (where 38% of adults have AIDS) or Afghanistan (with astronomical rates of infant mortality), even today, I'd be at the end of the average male life expectancy already.

Here, I am lucky to have a wonderful family, and support, and great health care, and I can still choose to live, to enjoy it, to write what you read, and to make my life as long and happy as I can.

Is chemo isn't working how about RFA and or surgery?

Both too risky right now, given the number of tumours and their size and positions.

I think I like to deny that you are seriously ill even more than you do, because I love to read about your kids, Vancouver, music, and everything else. I only remember when you talk like this, or when you write about your own illness. My husband always used to say that doctors could not predict lifespan, but that if a doctor told you how many months you had to live, you might oblige him by dying close to that time -- almost as if you wished to please. He never told a patient any time predictions for that reason.

I try not to deny it—although sometimes I have a strangely matching withdrawal reaction that emerges from both denial and fatalism—but rather to be realistic and pragmatic. What that looks like changes too. As I described very nerdily back in my interview on CBC's Spark radio show last year, it's almost like living in a quantum state, Schrödinger's cat–like, neither quite alive nor dead either. It takes some effort to break out of the stasis that can induce and make sure I'm living my life, rather than waiting for it to be over, or to return to the way it used to be—neither of which is happening right now.

Keep in mind that statistics can only predict what happens to groups of people, not to individual people.

Which was my whole point.

Wishing you the best of luck. I'm
not praying because I don't believe in a god.

Me either, Ned, so thanks!

hey, this comment is from marina. this post gives me a chill too. it even scares me, more than I thought it would.

Derek - you forgot to mention all the people you've inspired.
To write. To create music. To simply live a bit more creatively.
Your writing is succinct, your music is uplifting and your portrayal of daily family life, well, it makes me a small bit envious but a huge lot happy, happy, happy for you!
You're an awesome fellow and I count myself lucky that I got to know/work with you, if even for a short time.

My own fight with bladder cancer has taught me that there is no going back, only forward. I love your BLOG and its reminds me that life is to be lived and not merely gotten through. Best of luck to you. My family and I are all pulling for you.

Danio was my cousin. It still feels so surreal. He had great talent and probably would have won Project Runway had he been able to continue on. We are all so proud of his accomplishments. His family misses him each and everyday. It is a void that will never be filled. They say time heals but no amount of time will take away his mother, father, sister or brother's pain they endure each and everyday. It's been almost a year and it still hurts very much. I honestly hope you are doing well. Keep fighting. Do ALL the things you want to do and tell everyone how much you love them. I wish nobody this pain and suffering caused by this disease.

Derek, I have read your blog over and over again. You and your family are in my thoughts in prayers. I am Danio Frangella's sister Sandra. The best advice I can offer you Derek, is to follow all the instructions your oncologists suggests. Be mindful of your body's limiations, it is not as it once was. Danio lived each day to the fullest. He sought medical treatment snf was basically given two (2) months to prepare for his passing. Unable to accept his fate, he sought treatment at a private clinic in Milano Italy. There, he underwent very aggressive chemo and took numerous amounts of pills for Chronic Myeloid Leukemia. He bulldozed his way through his treatment (his words) and lived another seven (7) years. At his passing, Danio have very little regret in life, of which, they will remain private with me. Derek, be aggressive in your treatments. Iniate and accomplish all you wish to finish in this life. I still cannot accept that with all the funds raised and the research devoted to cancer, that there is still no cure. How many more families must endure what my family and I are going through...Our hearts are broken. I know what we lost. Danio was a great man. I feel violent when I hear that time heals all wounds.

To my anonymous cousin that wrote in,, I thank you.

Thanks Sandi. Though I never knew him, I still think of Danio from time to time.