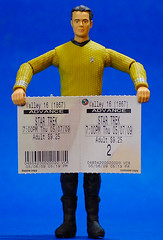 Remember back in 2006 when I raved about the then-new Casino Royale? It defined how to reboot a movie franchise. And the new Star Trek, which I saw tonight, learned that James Bond lesson, in spades.

Trek never shied away from time travel—the old crew used it to do everything from keeping the Nazis from winning the War to saving the whales (and the Earth). But the new movie is especially clever with it, managing to maintain the integrity of the original series and movies, and all their sequels, while giving the "new" crew entirely different directions to go.

In another way, that hardly matters. My kids enjoyed the movie tremendously, even though they know basically nothing about previous Treks. It's just a great big ball of fun. Despite all the praise it's received, it was also still considerably better than I expected.

But that was Winona Ryder? Didn't even recognize her.