Today was the day

The beginnings of human calendars are arbitrary. We're using a Christian one right now, though the start date is probably wrong, and the monks who created it didn't assign a Year Zero. Chinese, Mayan, Hindu, Jewish, Muslim, and other calendars begin on different dates.

If we were to decide to start over with a new Year Zero, I think the choice would be easy. The dividing line would be 40 years ago today, what we call July 16, 1969. That's when the first humans—the first creatures from Earth of any kind, since life began here a few billion years ago—walked on another world, our own Moon: 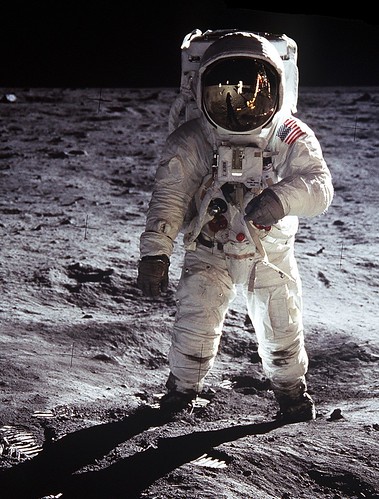 They landed their vehicle, the ungainly Eagle, at 1:17 p.m. Pacific Daylight Time (the time of my post here). Just before 8 PDT, Neil Armstrong put his boot on the soil. That was the moment. All three of the men who went there, Armstrong, Buzz Aldrin, and Michael Collins, are almost 80 now, but they are still alive, like the rest of the relatively small slice of humanity that was here when it happened (I was three weeks old).

If the sky is clear tonight, look up carefully for the Moon: it's just a sliver right now. Although it's our closest neighbour in space, you can cover it up with your thumb. People have been there, and when the Apollo astronauts walked on its dust, they could look up and cover the Earth with a gesture too—the place where everyone except themselves had ever lived and died. Every other achievement, every great undertaking, every pointless war—all fought over something that could be blotted out with a thumb.

Even if it doesn't start a new calendar (not yet), today should at least be a holiday, to commemorate the event, the most amazing and important thing we've ever done. Make it one yourself, and remember. Today was the day.

I find it even more incredible that just 70 years before Armstrong's first step the main mode of transportation was still the horse, like it had been for the previouse 6,000 years or so.

There were people alive who saw the Moon landing and remembered a time before cars, refrigeration, planes, etc.