Cross-posted from Inside Home Recording... 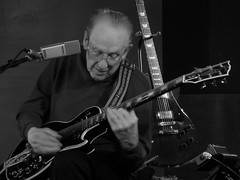 No one who performs popular music, or records music of any kind, hasn't been affected by Les Paul, the legendary guitarist, musical innovator, and inventor who died today at age 94.

Many people know him only for the solidbody electric guitar that bears his name—indeed, he hand-built his own solidbody electric years before that, but Gibson was uninterested in the design until rival Fender successfully sold similar concepts in the early 1950s. Still, Paul was not only a talented and prolific player (who continued a regular live gig in New York until very recently), but also a hit-making jazz and pop artist, as well as the inventor of multitrack recording and overdubbing, as well as tape delay and various phasing effects:

He was a constant tinkerer, heavily modifying even his own Les Paul guitars with customized electronics and switching, and often acting as his own producer, engineer, and tape operator. Every listener to Inside Home Recording, and every musician or recording enthusiast today, owes him a massive debt, and we'll all miss his talent and contributions.

Rest in peace Les Paul. It's funny. His name is so iconic that it sounds funny attaching to an actual person.