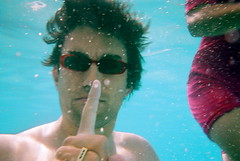 Today, as part of Blog Action Day, I've agreed to write about the environment and climate change. I've done that here many times before, generally in a positive way, or at least a frustrated one. But not today.

Maybe I'm just in a pessimistic mood, but honestly, I'm starting to think we're screwed. There are honest moves afoot, especially in Europe, to change patterns of human energy consumption and reduce carbon emissions. But here in North America, where we use more energy per person than all but a few very small countries, we're doing essentially nothing.

I first became aware of increasing human effects on the Earth's climate around Earth Day in 1990, almost 20 years ago, which was a pretty high-profile event. For awhile after that, there were lots of recycled products in the grocery stores, and talk of converting away from oil, gas, and coal to heat our houses, generate our electricity, and power our vehicles.

And then things slid back roughly to where they were before. Paper towels and toilet paper went from recycled brown to bleached white again. As the economy boomed, people who never went off-road or hauled lumber bought huge Hummers and pickup trucks. Politicians, businesspeople, activists, and others expended a lot of words about the problem of climate change. Yet here in Canada, while we've improved the efficiency of what we do, our overall emissions keep going up, despite our promises.

In the United States and Canada, we're distracted by economic crises and healthcare reform and celebrity scandals and cable reality shows. The developing world is growing too fast not to increase their own emissions. Europe and other countries making efforts aren't enough. By the time sea levels start rising in earnest and the social and political disruptions start, we probably won't be able to keep climates from changing all around the world.

So in all likelihood, we'll wait too long, and we'll have to adapt as our environment alters wildly around us. That will be expensive, disruptive, and probably bloody in all sorts of ways.

I'm not saying we should give up and do nothing, but right now it seems that, collectively, we (and I'm fully including myself here) are very nearly doing nothing by default. Since I have cancer, I don't know if I'll be around to see what happens in a few decades. But my kids will. They will most probably, as the curse goes, live in interesting times.

Over on Facebook, my old university colleague Todd wrote, "I am convinced climate change is happening...I just wish I knew whether to be scared or annoyed. Its like we are doing this giant experiment with too many variables and no idea of the outcomes."

It is a giant multi-variable experiment, and there is no control, which is the problem. As I've said before, no matter how disruptive it turns out to be, we don't have to worry about Earth or life on it—they've been through worse before (ice ages, asteroid impacts, massive atmospheric changes, other mass extinctions), and have adapted and thrived.

We have to worry about ourselves and how the changes are going to impact our civilization. Objectively, burning the remains of plants and microorganisms that died tens of millions of years ago for energy is a clever hack, but a bit bizarre. Even aside from climate change effects, it seems a profoundly roundabout method. There are far more direct ways to obtain power from solar, wind, tides, geothermal, hydroelectric, biofuel, and even nuclear sources.

We have an opportunity to find something (or many somethings) better than the hack we're using now. But I look around and we're just not trying very hard to do it. At least, not as hard as climate-change evidence seems to tell us we should be.

once again it's the Germans paving the way not only for social, but environmental reform. Germans were pioneers in science in the 40's (Einstain a notable example). They also don't have a death penalty and signed the Kyoto protocol. Germany spends 1/3 of its GDP on welfare/social programs as opposed to the USA where it's only 20%.

I think like most things, the world needs to come to the very brink before they make any changes. Once that occurs, change will happen quickly and dramatically. For example, retooling most of the US factories during WWII only too six months, but it had to be done. Right now there's too many political obstacles to implement everything.

Perhaps that will be too late. Who knows. I take comfort in the fact that regardless of our actions now, the planet will be fine. If we kill ourselves, so be it, but the planet will most likely recover from our recklessness.

I, for one, welcome our new ant overlords.