Faster than anybody expected 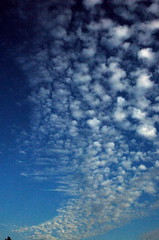 By the way, if you're in a mood to be scared, forget about Saw V or The Uninvited or The Unborn or My Bloody Valentine 3D. Listen to Climate Wars on CBC's always excellent radio show "Ideas."

In fact, listen to Gwynne Dyer's documentary anyway (it's on the podcast), whether you want to be scared or not. The key statement:

Everything that is expected to result from global climate change driven by greenhouse gases is not only happening, but it's happening faster than anybody expected.

Learn why, and how global warming and climate change, which should rationally be non-political, became a political and ideological issue anyway, and what might happen—including some potentially nasty wars. Ignore anything else I've been pointing you to. Really. Just listen.

Amazing episodes (part 1 and 2). I remember studying Gwynne Dyer's books on war at school. He frighteningly predicted a lot of things that I wish did not come true.

The people in power aren't going to care until Washington DC floods. NO one seems to care about the environment and it's always been that way. It's all about propping up the economy, bailing out the banks, forcing democracy in the middle east, and so on. The top three positions in the Obama cabinet are secretary of defense, treasury secretary, and secretary of state. Those are the only positions that actually get covered by the media and have an impact policy.

You got me hooked on the Ideas podcast about a year ago and I've been listening to it every Monday ever since. It never fails to disappoint, and as you already pointed out, this latest series is informative and insightful. What I like is it is not fatalistic - he covers both problems and possibilities and it's clear that those who care to do something about this have both time and ability to take action. There are some exciting energy alternatives on the horizon that will hopefully replace oil just like coal replaced firewood.