Obama, religion, and hard work ahead

I was driving to my oncologist appointment just after 9:00 a.m. yesterday when the Chief Justice of the U.S. Supreme Court inaugurated Barack Obama as President of the United States. I heard it on the radio, and I teared up a little. The oath of office itself was surprisingly short, and both Obama and the Justice stumbled a little with the words in their enthusiasm—it sounded refreshingly informal and real.

Almost a year ago, even before the economy started seriously tanking, I wrote about Obama, saying:

America and the rest of us need inspiration now. America's citizens need to say to us, and to themselves, "We have been on the wrong path, and we will choose a different and better way." To see and to listen to Barack Obama as president will demonstrate the beginning of that choice. If I'm right, I think he will win.

He did win. Yesterday he could celebrate and dance; today he has to start doing stuff. Web nerds like me see good signs in small things, like the new whitehouse.gov website, which is well designed, has a blog with RSS, uses valid code, and is search engine friendly. More importantly, he has already ordered a halt to military commission prosecutions at Guantánamo Bay. He meets his military advisors this afternoon to plan withdrawal of U.S. armed forces from Iraq.

His response to America's unusual religiosity (for a Western democracy) is also worth noting. President Obama was not involved with and did not endorse this ad in the Washington Post from the American Humanist Association (via PZ Myers), but I think it is a good sign: 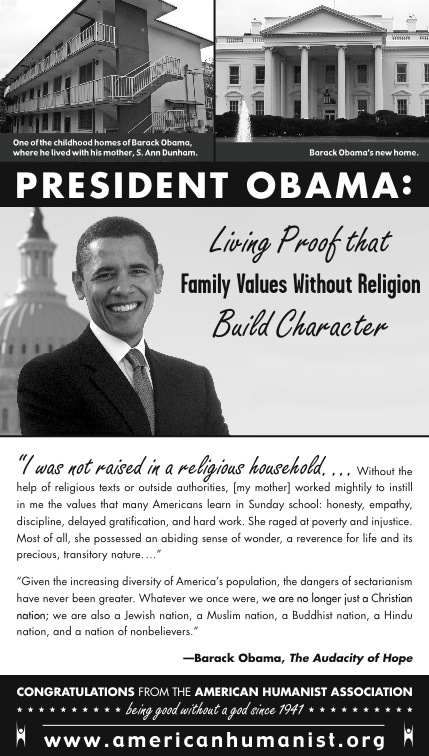 The headline is "President Obama: Living proof that family values without religion build character," with supporting quotes from his bestseller The Audacity of Hope ("I was not raised in a religious household..."). Some people are gonna get steamed over this one, I'm sure, and use it to continue maligning the new President. But though he is a Christian now, Obama obviously knows the benefits of a secular state, and why his country's founders created America as such. He understands that the non-religious —like both his parents—can be good people and raise healthy children, like him, who make wise choices.

That he and his administration not only recognize, but celebrate the diversity of their country—and that, in his own carefully crafted words during the inaugural address, "our patchwork heritage is a strength, not a weakness"—is a strength in itself. He, like us, has seen in the past decade how parochial sectarianism can do vast harm around the world.

The man has enough good will from Americans, and many of the other few billion of us, that he need not work miracles immediately, but he also seems to know that he doesn't have too much time. He must work with the citizens who elected him to realign his country's domestic, foreign, energy, and environmental policies. He must translate his ability to inspire as a candidate into a mandate to inspire as the world's most powerful person. I think, and hope, that he is up to the task.

Did you see the way his first act was to give all his top staff a pay freeze, and then bitch-slap the lobbyists? Loved it!

I wonder if he stopped being an atheist or if he simply knew the best way to build up his political community. Do many atheists raised by atheists join the church just after college?

I'm not sure it's that clear-cut. He calls his mother "detached from religion" and his father (whom he hardly knew) a "confirmed atheist," though raised Muslim. His stepfather was also not religious.

But Obama himself has been a Christian for over 20 years, and who can say whether he was ever an atheist but him? He was raised without much religion, but that's only one component.

In part he may have become a Christian out of political expediency, but it may also have arisen from the sense of community it gave him, from the exposure to the black church he garnered in his early community organizing days. I haven't read his books, but I'd bet they'd give you a much better idea of his reasons.

He is certainly no fundamentalist, and his United Church of Christ (not directly affiliated with the United Church here in Canada) is a pretty liberal organization overall. I don't know how often he prays, or says grace, or reads the Bible. I think he has played up his religious affiliation in order to help get elected, but I also don't think he's being ingenuine either.

I think there was A LOT of Amen and Hallelujah during that inauguration.

That gay hating preacher doing the blessing? Unnecessary in a polytheological state. Be INCLUSIVE. Even running off 4 religions and "non believers" wasn't good enough.

Made me proud to be Canadian where the separation of Church and State is a little more clean.

The Daily Show, as usual, summed it up well with a montage of all the God/religion mentions in the supposedly secular inauguration events. I like Jon Stewart's "God with a Jersey accent" impression at the end of the segment. The previous day's coverage is worth watching as well, especially in the interview with openly gay Episcopal Bishop Gene Robinson, who was at the event, and who had a clever rejoinder to one of Stewart's questions too.

Obama may be a good example of what can be done in a non-religious home, but let's not forget that this did not happen in a environment free of the influence of religion, or Christianity more specifically. Let's not forget that gay rights, abortion freedoms, and atheistic organizations have all grown in countries influenced by the ideals of grace and giving people the choice to chose their own way, ideals of Christianity. Some people may not like religious people, or Christians in particular, but they ought not bite the hand that feeds them. Look at human rights history and you will see that Jesus Christ is the author. Love your enemy... Do good to those who hate you... Pray for those who persecute you... Please be thankful that that "gay hating preacher" preaches and lives Jesus' command to love and live peacefully people he disagrees with.

That's one way to look at it. But the environments Obama was raised in included a wide variety of religious and cultural backgrounds: there are many Buddhists as well as Christians in Hawaii, a majority of Muslims in Indonesia, and so on. His parents (both non-religious, as noted) were an interracial couple, which was acceptable in culturally diverse Hawaii in the early '60s, but was actually illegal in many states on the U.S. mainland, where Christianity was the overwhelming majority faith, including among the legislators who made those laws. Their Christian faith did not seem to aid their tolerance in that case.

Certainly the modern secular West emerged out of Christian Europe, but whether that's an inevitable consequence of Christianity, on the one hand; or a contingent side effect of Europe being where scientific inquiry and industrialization emerged, on the other, isn't obvious.

Look at Europe during the Middle Ages, where various Christian factions in Constantinople, Rome, Lombardy, Aquitaine, and elsewhere were technologically and socially backward and constantly at war with one another -- usually over different interpretations of Christianity. It would have been hard to predict the region's later success compared to Hindu India, Buddhist China, Shinto Japan, the various kingdoms and religions of sub-Saharan Africa, the Dar-al-Islam around the southern and eastern Mediterranean, Zoroastrian Persia, or the Aztecs and Maya in the Americas. Indeed, many historians argue that it took the influence of Islam in al-Andalus (Spain and Portugal) to push Europe towards the Renaissance.

Go further back, to the Greek and Roman origins of much western philosophy and science (ideas that those Muslims brought back to Europe, incidentally). We can acknowledge our debt to their thinking, without saying that their religion of arguing Olympian gods and ritualistic slaughtering of hecatombs, or their society based on slavery and brutal warfare, is something we should follow today.

For the same reason, that people from a certain religious or national background have given us good ideas and insights about the world does not mean that all their ideas are good or correct. While most of the people who built the foundations for our current society may have been Christian, that doesn't necessarily mean that we should be too. I have not needed to share Isaac Newton's or Martin Luther King's devout Christian convictions to calculate planetary orbits or argue for civil rights.