This is not a model train

I know this photo looks like a model train, but it's not: 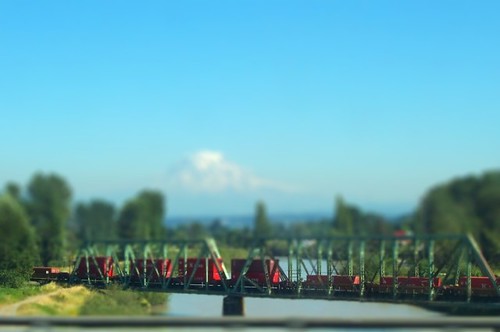 It looks like a model because of a fake tilt-shift lens effect. Oddly, the idea came up twice in one day: Stephen wondered if I knew about tilt-shift photography, and the same day TiltShiftMaker showed up on the Web (thanks to Scott for the link to that). Since I don't own any tilt-shift (a.k.a. perspective control) lenses or a Lensbaby, a free online tool was the perfect way to fake it.

The picture is from Interstate 5 near Tacoma, Washington, in summer 2005. It is actually a real train on a real railway with real trees and the real Mt. Rainier in the background. It looks like a model because of the selective focus effect I applied to the original image with TiltShiftMaker—one reason we know models are tiny is that the depth of focus when we look at them is much shallower than for larger objects. Simulating that effect makes big things look small.

Look, I tried it on a bunch of other pictures too.

That is a really cool piece of software!

Very cool. There are a couple of free plugins for Photoshop that create a similar effect...as well as a bunch of tutorials for doing it manually in PS.

Toughest thing about it is having a good photo to start with. Your train 'set' is great!

I've got a Lensbaby Composer but it doesn't quite do the tilt/shift effect (it's close) because it's lenses are curved whereas a proper tilt/shift lens is usually flat.

I'll have to check this software out. In the meantime, have you seen this???

A Sydney-based photographer, Keith Loutitt, has been using tilt-shift in conjunction with time-lapse and has come up with some stunning videos.

I have seen those videos. Extremely cool.

My brain does this to me sometimes when I'm really tired. I never had a vocabulary to describe the effect before, but I feel like I see the world in miniature - which is pretty hilarious.