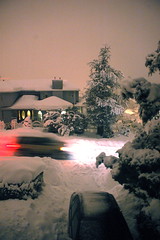 I've lived in this small section of town, near Metrotown in Burnaby, B.C., for the last 37 years, since I was two years old. I've never seen snow accumulations like this, not even in the record-setting 1996-97 season. Maybe it was like this in 1964, or in the early '70s when I was young, but I don't recall it.

The shovel pile on the left side of the bottom of our driveway is nearly as tall as me. I minimally dug out the driveway before going for groceries at 7 p.m. today. I got back at 8 p.m. and could not drive up, even in snow tires, so I shoveled again, because 3 or 4 cm had accumulated. I managed to finesse the car in.

Trees are coated. Houses look like marshmallow sundaes. Power and telephone lines are unpredictably dropping thick ropes of snow to the ground, then swaying from the release. 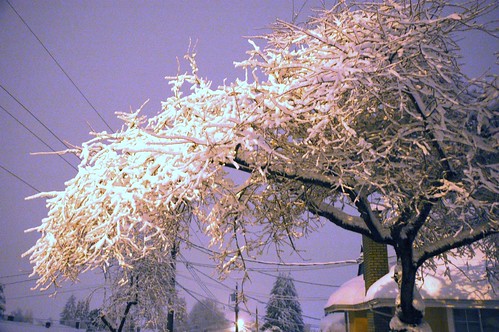 This is after regular snowfall since mid-December, little of which has melted. Around here (some altitude above sea level), we had very low temperatures (–15°C) in early December, then snow in the middle of the month, continued cold, more snow before Christmas, a bit of melt after, then a freeze, then more snow, and more, and more. 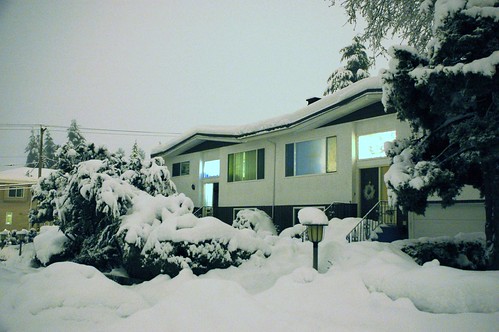 Up the street where people have bigger driveways, the snow piles are considerably taller than me. Street signs are becoming obscured, and sidewalks have disappeared—people must walk in the wheel ruts on the street: 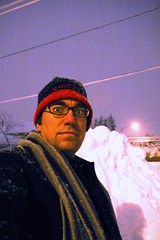 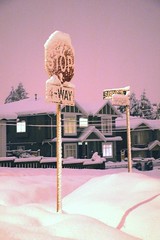 Since Greater Vancouver has little history of lasting snow, most people around here don't have proper snow tires, which makes it worse for driving. My wife and I do have them on one of our cars, but even with those I had trouble on the steep driveway this evening. 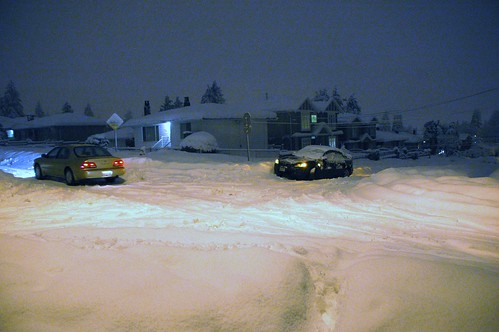 Some people have abandoned their cars tonight in our neighbourhood. Others are putting on tire chains even on major bus routes that have been plowed. Still other vehicles have been so buried since before Christmas that you can't see them at all, just big lumps in the snow. People with 4WD but not snow tires are getting stuck now. 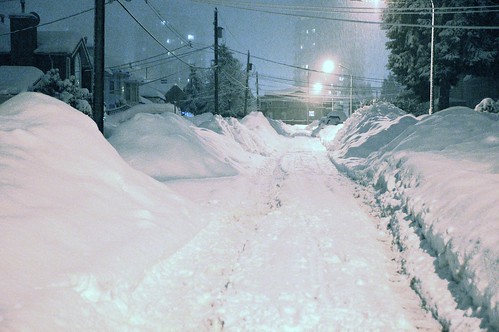 Today's bout is taking things over the edge. Forecasts have called for rain several times in the past week, and in some parts of Vancouver it came, but here it has been snow every time. The roof added above a sundeck on a house a few blocks away collapsed, and our neighbours lost a large cherry blossom tree after Christmas for the same reason: 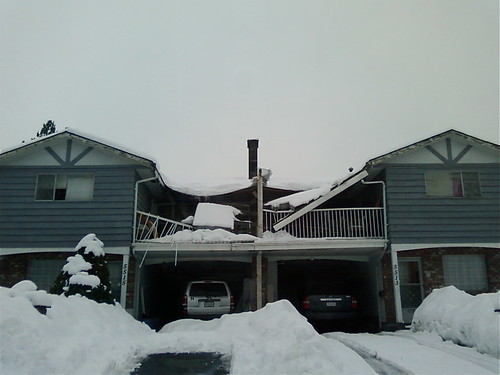 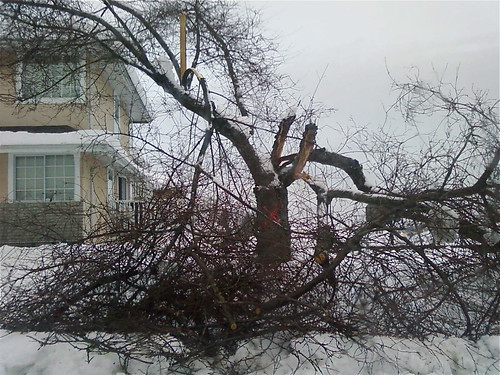 Tonight the whole region is in a blizzard, and police are recommending no one drive unless they really have to—and then chains or snow tires are necessary. 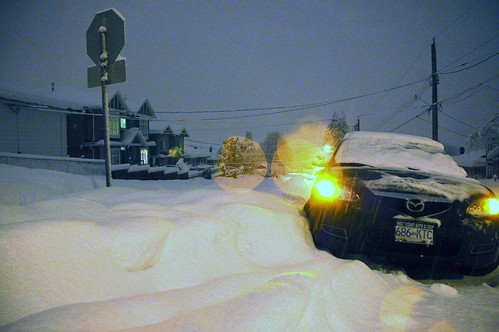 Some of the streets are getting hemmed in from shoveling, buried cars, and the occasional plow heaping stuff up, plus the ruts are getting so deep that the snow in the middle is scraping the bottom of our car when we drive there: 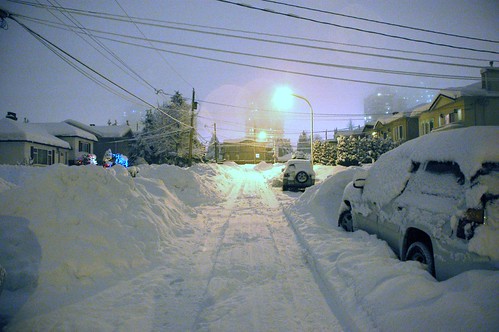 I should say that the City of Burnaby crews do plow side streets when the clearing of major roads is sufficient and time permits. One of the streets on our corner was plowed several times in December; the less-used street out front, once.

But neither has been done in some time since the snow kept coming up here on the north brow of the hill. The trucks need to keep the highways and main streets open. It's beautiful, but pretty soon walking (or snowmobiles, or dogsleds) will be the only option on our street. 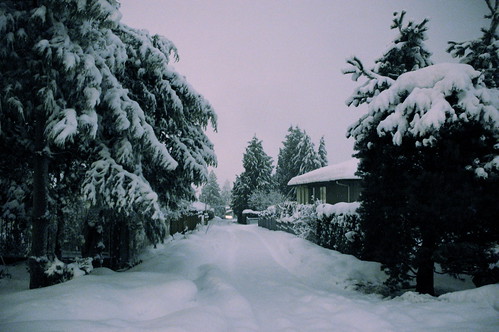 I never thought I'd say this in winter in this city, but I sure hope for rain, and lots of it. Not all at once, mind you—for a gradual melt, a nice steady drizzle for a week or two would do. You know, normal Vancouver weather?

Great photos, Derek. Hope you've got some B&W film in the Nikon .... should be some nice opportunities.

And send some of that rain and snow down here ... we're still in drought!

After two weeks, I finally saw a snowplow on my side street for the first time.

It was STUCK and the driver was trying to dig it out.

These are strange times in this-here city.