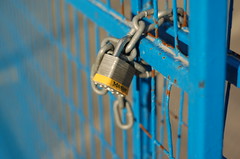 Since the early days of this blog, I've written about how I dislike copy prevention technologies for software, music, and movies—and have hated them since my early days of computer use more than 25 years ago. That's because it's never wise to treat your customers as your enemies.

Today, crusading Canadian copyright lawyer and professor Michael Geist writes about how finally, slowly (at least for music), the big companies might be getting it. Until 2008, the recording industry was intent on suing file sharers, locking files with DRM copy prevention, and pushing through crummy copyright legislation. Now:

The decision to drop the lawsuit strategy was long overdue as it had accomplished little more than engender significant animosity toward the industry [and] helped to convince some of Canada's best-known artists to speak out against the practice.

Apple, the dominant online music seller, announced that it will soon offer millions of songs from all four major record labels without digital locks [which] reflects the recognition that frustrating consumers with unnecessary restrictions is not a particularly good business model.

In addition to the privacy, security, and consumer concerns with such legislation, laws to protect digital locks seem increasingly unnecessary given the decision to abandon their use in the primary digital sales channel.

I don't know if these changes mean that the recording industry is figuring out effective ways to do business in the Internet file-sharing world, or whether it is just giving up on failed strategies, but I find the trend encouraging. In practical terms, it means that, with six functioning computers for four people in this house, we won't have to worry too much about iTunes letting songs purchased from the iTunes Store play on only five computers anymore.

Alas, movies, audiobooks, and such are another story entirely.

But somehow artists must get paid, and one way is through selling music though CDs.If people are swapping files and dowloading them artists won't have a financial incentive to continue to product quality music.

I agree that artists should be paid (as someone who has at times worked as a full-time musician, I'm one of them), but there's no law of physics saying we MUST -- and certainly not that we must be paid with the same business model as before.

Selling music through CDs is one way, but that way is probably on the way out, regardless of file sharing. Digital purchases are an alternative. Moving back to income from live performances and merchandise is another. Licensing for use in other media is yet another. Live shows and licensing have recently been my major musical income streams.

I think the way things are going, there is a great opportunity for MORE musicians and other artists to make a decent living from their work. What is less likely is being a huge-selling, multi-millionaire superstar from album sales. But that was never very likely for the vast majority of artists anyway.

Regardless, suing and annoying your customers and fans is never a wise way to grow your business, in any field. And trying to preserve obsolete business models with lobbying and legislation won't work in the long run either.