I think he'll take it 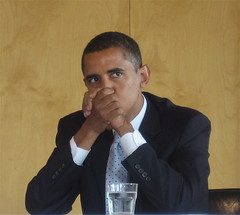 I'm Canadian, and can't vote in the upcoming U.S. elections. But they affect me, as they affect everyone on the world, so I have opinions.

I think—as most seem to—that John McCain or whoever wins the Republican nomination would have to work miracles to win the general election this time around. And I think that's a good thing. His party has damaged his country and its relations with the rest of us in the past seven years, and they do not deserve to keep running it. I hope its citizens agree.

On the Democrat side, there were a number of strong candidates, now down to Hillary Clinton and Barack Obama. As Larry Lessig notes in his video today, their policies do not differ especially radically (although Obama's policy document and website state without equivocation, "I will close Guantanamo," which is enough for me right there). I think either one would make a good president of their nation, and obviously make history doing it.

Where I agree with Lessig, and why I think Obama is a better choice, is that he is inspiring to watch and to listen to in the way no other presidential candidate is, from Clinton to Edwards to McCain and the rest. There is a danger with Obama, as Tom Negrino notes:

What bothers me the most about Obama is his core message, which boils down to "I'm magic, and I'll be able to bring everyone together to move America forward."

What I've seen of his policies seems more concrete to me, but it is true that many of his speeches are long on rhetoric and short on details.

Yet rhetoric is not evil if it not empty, if real action follows it. I think Obama can inspire a politics of "hope and common sense," rather than one of "fear and ideology," as he says. To lead the United States, he need not know the answer to every question—that's why presidents hire smart staffs—but he does need to listen, and to prompt action.

I think one reason he inspires so many already is that while he does give speeches crafted by a team of top-notch writers, he doesn't sound like a machine while he does it. He comes across as a human being. Clinton may be smarter, more knowledgeable, and more experienced, and I hope if Obama wins she can find a place to execute her ideas in his administration. (And if she wins, I certainly hope he can find one in hers.)

But she is not more inspiring. America and the rest of us need inspiration now. America's citizens need to say to us, and to themselves, "We have been on the wrong path, and we will choose a different and better way." To see and to listen to Barack Obama as president will demonstrate the beginning of that choice. If I'm right, I think he will win.

There's so much I could say about this, but I just wanted to leave you a few bits of info:

During these primaries on Super Tuesday, about 14 million Dems got votes, whereas the GOP got about 8-9 million.

Part of that is because the GOP can only get votes from registered Republicans, but still, the diff in those numbers is huge.

Obama is someone who seems to be "JFK"-like and "MLK"-like. He DOES seem to inspire people. He seems to have the ability to take the US in a different direction. It will be interesting to see if he can really do that. If he can, and if he can avoid the fates of JFK and MLK, he could definitely change the course of a nation (hopefully for the better).

Not sure if Clinton is smarter; Obama has pretty impeccable academic qualifications. He is a fabulous speaker, whereas Clinton is wooden and uninspiring.
Obama is more likely to attract a staff with fresh ideas to run the White House and government policy than is Clinton, whose political debts would likely require her to hire old school pols and friends of lobbyists who would call in their favours.

I was listening on CBC and there was a point about Obama's lack of experience so Im hoping that if he gets in, he surrounds himself with lots of experience. Just think, if he pursues the 9-11 culprit, it will be Osama vs Obama.

Well I can vote and I assure you that I hope neither Obama or Hillary is occupying the White House any time soon. I would love to live in a world where we all get along and everyone sings kumbaya around a campfire drinking Coke. Truth of the matter, Islam is a religion of hate and its main purpose is to convert the world to it, or kill non-believers in the process. Hopefully McCain can pull it out and I beleive he can, remember 7 million of those 14 million Democrat voters will not have their candidate to vote for in November and McCain can appeal to them and the Independents who (mostly) can not vote in the primaries and who are the fastest growing political(party).I would recommend doing some research on Hillary as she has a mafia-like past. Also while Obama is intriguing he does not have enough body of work to be qualified for the CEO of the United States of America.We need capitalism not socialism in the good ol USA!

btw - all political discussion aside, I enjoy reading your blog.

Mike, obviously I disagree with you about the candidates -- but from an American perspective, most of us in Canada are pretty much a bunch of Commies anyway, so that's little surprise. I think you guys could use a little more socialism down there. :)

I also think that the Republican foreign policy approach since 2001, which McCain has endorsed, has not made the world safer from the murderous strains of Islam or other terrorists. He seems a better option than some of his more nutbar opponents in the GOP campaign -- he doesn't seem to think the universe is only 6,000 years old, for instance -- but that's not enough for me.

I don't think there's any such thing as a "religion of hate," only hateful people. I'm not religious myself, but to me it seems pretty obvious that hateful people of many religions - yes, even christianity - have committed some atrocious crimes in the name of God. To then blame the religion itself seems utterly unfair.