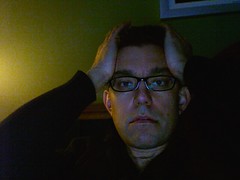 Once again, it is snowing crazily here in Burnaby. It seems like we've had many more days of snow this year than usual. I like it, it feels very Canadian here, but I can't go out and enjoy it.

That's because today I started my ninth chemo treatment (out of twelve total) in this cycle, which began in October and will finish at the end of March. I'll spend most of tonight in bed watching Iron Chef America and MythBusters. I'll probably also be lying down most of tomorrow.

If things go as they usually do, I'll be a bit better by Friday, and pretty much back to normal by Saturday, when I hope to play drums with my band for the first time since July.

Chin up! Sounds like you're way over the hump now, Derek. Seems like a harsh winter this year; China just had their worst snow storm in 100 years, and even Iraq got rare snow this year!

Where are you playing on Saturday?