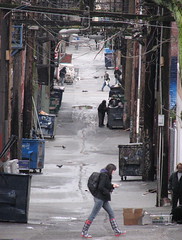 Vancouver's Downtown Eastside is infamous worldwide. Even though it's home to thousands of people from all walks of life, most folks here and elsewhere know it for its poverty and widespread drug use.

When my mother was young, it was our city's main shopping and entertainment district. Her parents often visited for dinner and dancing. Even when I was a kid in the '70s, we went there all the time, to Woodward's, Army and Navy, Gastown, and elsewhere in the neighbourhood. Then, when Woodward's shut down in the early '90s, the area's gradual decline became an implosion.

But it's part of a much bigger picture. The Downtown Eastside is the symbol, but Greater Vancouver's poverty and addiction problems are widespread. There are hotspots of dealing in New Westminster, Surrey, and other places too. Beyond those, the consequences—illness and disease, property crime, street prostitution, violence, despair—are everywhere in my hometown, from the city centre to its most far-flung suburbs.

Yet this is still a delightful place, a wonderful one to live in, beautiful and clean and vibrant and diverse. How can that be?

I've never been an addict, nor poor, nor in danger from addiction or poverty, but I know people who have, some of them very close to me. When they are part of that world it is like they pass through the looking glass, into another realm, a parallel city that is here, beside the rest of us. Or inside, but largely divorced from the green transparent condo towers and the parks and the trendy shops and the well-maintained Vancouver Specials.

In that shadow city, people steal from friends and relatives for money to buy cocaine, booze, heroin, and meth. They and their associates get abused, beaten up, and threatened. They live in crappy apartments or basement suites or rooming houses or run-down hotels or on the street. Or in decent places they fear they could lose in an arbitrary moment. They hang out with gangsters, frequent places I'd rather not know about, flick lighters and burn lips, or tap needles and hunt for veins.

Those of us on the bright side of the glass encounter touches from the other side. Should we believe the rumours: are those 99-cent slices of pizza so cheap because the cheese is fenced by addicts stealing from supermarkets? Should we buy those steel screen doors because our houses have been burglarized and our CD collections stolen once too often? When we see that man or woman begging on the street, or sleeping in a wet mummy bag under the overpass, or standing in line on Welfare Wednesday, can we look them in the eye?

Closer to home, more bitterly, we see people we love, or want to keep loving, drift back and forth across the glass, sometimes healthy and engaged and employed, sometimes ill and disconnected and aimless. We can't tell which version is real, because they both are.

So Vancouver, like many other cities, is amazing and happy and prosperous, not just on the surface, but all the way through. Also all the way through are the other, hollow parts that might be hard to see, or simply hard to look at. The parts intertwine, they interlock, they form the social structure of our city. If you slip through the looking glass into the hollows, it can be hard to find the way back, even when the other side, and your old life, is right there.

I don't have a solution, or even an ending. Smarter people than me are working hard to try to figure things out. But maybe these things resist figuring, resist logic. We are all here, and there. We don't know which road, if any, leads out of the wood.

Derek, you sure picked a hard subject to write about. I drive into the heart of the chaos almost once a week. My 8 year old daughter looks out the car window like she is watching a bad car crash. She often asked me how people end up like that. I really don’t have any answers for her. In my mind I know there is very little I could do. All I could do is teach her how to make right choices and hope that she will. The point is no matter what walk of life we come from there is always a chance we may end up “there”. When people do end up there, the rest of us usually don’t want to acknowledge them. They become ghosts among us and the Downtown Eastside is a human dumping ground. From the people I’ve met there, every one of them had a different reason for being there. I think that is why finding one single solution is so difficult.